Presented
is the actual U.S. Navy Commission Pennant flown by the USS CAMBRIA APA 36. The CAMBRIA, a
Bayfield-class attack transport, was commissioned on 16 JAN 1944. She served her country for 26 years, 7 months and 29
days, until decommissioned on 14 SEP 1970. This pennant dates from 1964-1965, the period in which the ship’s prior owner
was the commanding officer. It measures 70 inches on the fly by 2 5/8 inches on the hoist.
Since the prior owner is still living, now a long retired Navy captain, his name will only be disclosed to the buyer.
Also available, but not included in this sale, are his sword, log books, and other things including
a large tailhook plaque which he was was given when he was transferred from the next ship in which he commanded. BONUS ITEMS: Included in this sale are two ZIPPO Lighters. One is named to the captain and
is unused. The other is named to the captain’s wife and also captain’s cabin. Plus a ship’s plaque named to the captain
and a picture of the ship. 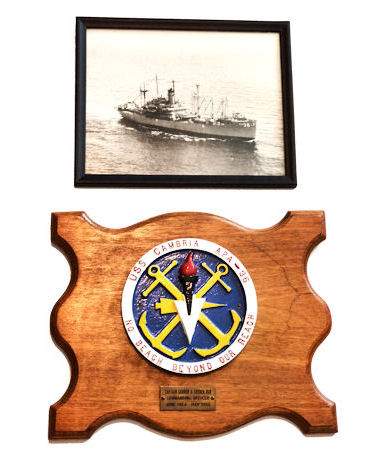 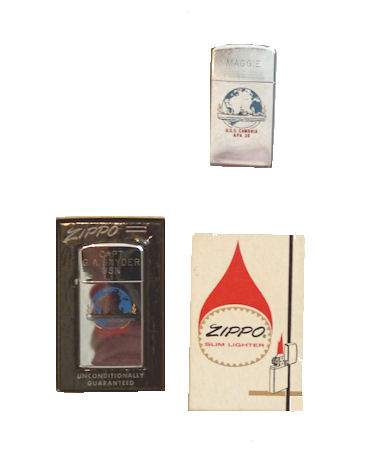 SPECIFICATIONS: The pennant is made from a
synthetic material likely Dacron or nylon bunting and is machine
stitched, with a white duck header, and the stars and stripes imprinted. There is  a single brass grommet
at the header. It has been flown and shows its use. The flag is mounted on tan artist board in a stock frame
that is 31 ½” x 13” x ¾”., white flag is folded left to right with two folds making a “Z”
shape. The name of the ship is on the dust cover on the back.

These pennants are given to the captain
when he is relieved, i.e. transferred, or retires or the ship is taken out of commission.

:
The commission pennant is the normal characteristic emblem of a warship.  Also called a commissioning, masthead, long,
narrow, or coach whip pennant, the use of such a mark has long been limited by international custom to public vessels of sovereign
states.  England restricted its use exclusively to the King’s ships in 1674, and today, for most navies, the narrow pennant
serves as the chief “distinctive mark” called for in article 8 of the 1958 Convention on the High Seas to distinguish warships
from other vessels.  In the U.S. Navy, the commission pennant is flown day and night at the loftiest point on the aftermost
mast, from the moment the ship is put into commission until the moment it is taken out of commission.  The only exception
is (a) when it is displaced by the personal flag of an admiral or a civilian official, or (b) in the case of hospital ships,
which fly the Convention (Red Cross) flag.  The commission pennant is flown in the bow of a boat to denote the presence
of a commanding officer.  If he dies in command, it is flown at half-mast in his ship as well as in the bow of the boat
carrying him ashore. Mounted on a staff and draped in black crepe, the commission pennant follows a ship commanding officer’s
casket in the funeral procession.

Although the commission pennant is not technically a personal pennant of
the commanding officer, it is generally used as if it were.  For example, a picture of it adorns his official social
stationery and he is normally presented a pennant used by his ship when is relieved from command.  The commission pennant
that is hauled down at a warship’s decommissioning becomes the property of its last commanding officer.

At one time, masthead pennants were extremely long;
the 1854 Tables of Allowances issued by the Bureau of Construction, Equipment and Repair prescribed pennants measuring
up to seven inches by 100 feet for ships of the line and 6.75 inches by 90 feet for frigates.  Originally all U.S. masthead
pennants had 13 stars, but, since those flown in boats to signify the presence of a commanding officer were too small for
all the stars to be distinguished clearly, a seven-star version was adopted only for boats in 1854.  With changes in
the design of warships, the length of the pennant for shipboard display was gradually reduced until 1933, when the maximum
size was set at 2 1/2 inches by 6 feet and the number of stars for all pennants was fixed at seven.  The one exception
to these specifications is the special case of homeward bound pennants. The term “commission pennant” was officially adopted
in lieu of “masthead pennant” in 1922.