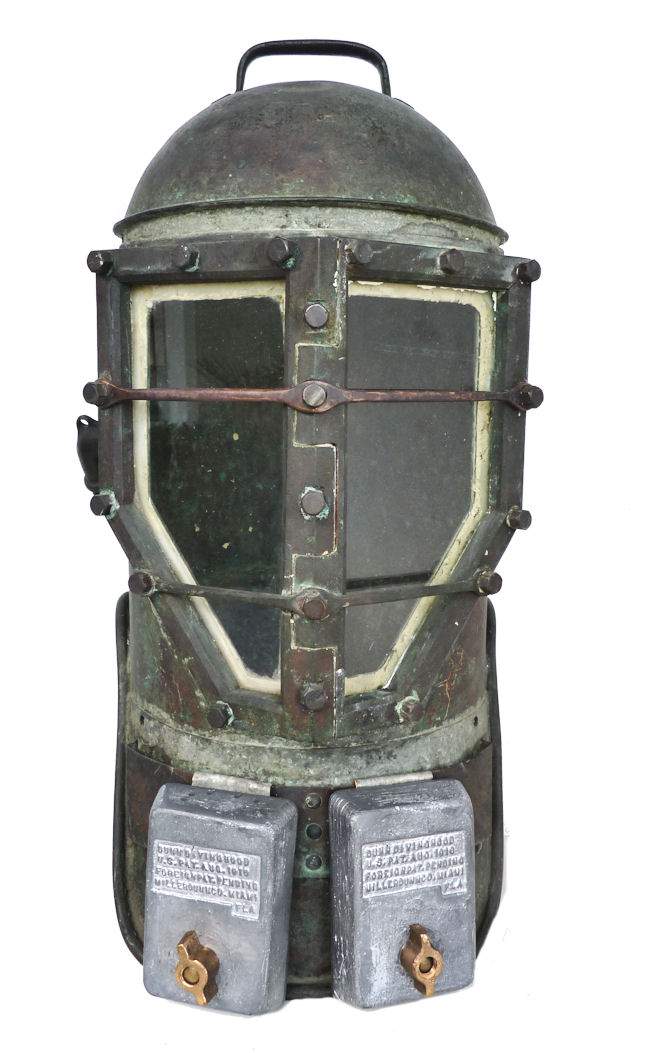 Presented is a shallow water Miller-Dunn Navy Style 2 Divinhood. It is complete in all respects
including second generation weights. This and the Style 1 are the rarest of this maker’s helmets and the most dramatic looking
of the three. The helmet has been owned by the same family for the last 40 years and is new to the market. It is in its state
of last being dived and has dark reddish paint with some black paint marks over.

This style helmet is one of the most dramatic
of all diving helmets and rarely comes on the market. An example should be a part of every serious collection.

BRIEF HISTORY OF MILLER DUNN DIVING HELMETS: The Miami, FL. company was founded by William S. Dunn and William F. Miller around 1914 with a focus on shallow water diving using helmets
and simple equipment that did not require special training. Its first helmet of consequence was the No 1 Divinhood introduced
around 1914, which was quickly adopted for use in all forms of light duty shallow water work. After 18 months in process,
in August ,1916, they were issued U.S. patent 1195793.

Having
had personal experience with the Style 1, we find its light weight and rudimentary design interesting to only the most dedicated
collector who wants an example of each model. It was followed by the Style 2 Divinhood which became the U.S. Navy’s first
official shallow water diving apparatus, and was part of the ships gear on many naval vessels prior to World War II. Considered
one of the most dramatic helmets ever made, they are extremly rare and remenicient of a medieval knights armor. We have not
had one to offer in years.

Like
all used diving gear, this is being sold for DISPLAY ONLY. It should not be dived without having passed inspection by a certified
dive shop.

In 1939, just before the onslaught of WW II, the Style 3 Divinhood
was introduced and mass produced in the many thousands through out the course of the War. They were ruggedly made, have a
distinctive look, and readily available on the market. You will find numerous sold examples on our website.

Miller-Dunn also made the Navy MK V in small quantities well
behind Morse, DESCO and Schrader, since it was the primary and possibly the only shallow water hard hat supplier to the Navy.

After the war, the need for helmets decreased dramatically due in part to the large surplus of helmets
finding there way to the salvage equipment market. The business of Miller-Dunn was adversely affected and the company ceased
operations sometime in the 1960’s.

CONDITION and MARKINGS: This helmet is in remarkable condition for its age and use having only
two very shallow dents on the top which are very difficult to see. Other than those there are no faults.

It is being offered as a display item only, and should not
be used for any other purpose unless certified by a competent diving shop.

The tag that appears on the right
side of the helmet reads:

This is the finest example of a Miller-Dunn Style 2 Navy Standard
diving helmet that we’ve seen. It will make a rare addition to any important collection or as a gift of significance.