Presented
is an eagle head saber which because of its pierced guard, is very rare. It was made for the American Market in England.
It has a reeded bone grip which is in perfect condition, and a curved polished blade. The hilt’s cross guard has four open
panels that extend into a sturdy stirrup guard that dates it to the Revolutionary and post-revolutionary period. Very few
swords with this style guard have survived. The scabbard has a single suspension ring and original metal tip and throat with
large throg button. They join a recently renewed leather sheath. The pommel is fitted with a Ketland style eagle in sharp
detail with the tang extending in to a prominent capstan. The condition of the capstan and tight fitting hilt shows that the
blade is original to the hilt. There is no looseness between the two. The workmanship is of very high quality. All the hardware
has a silver cast and indicates that the saber is made from white brass rather than a silver wash which in itself is unusual. 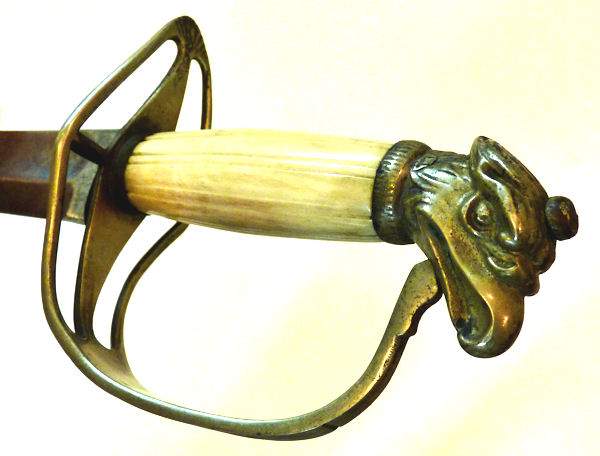 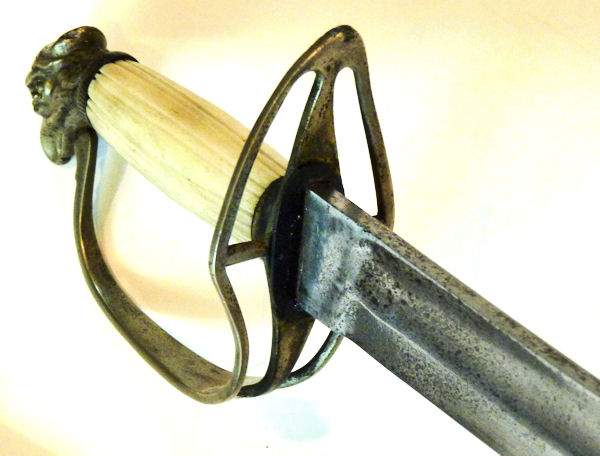 Ketland style eagle head is recognizable by its sharp features and flattened crest.
The tang ends in a prominent capstan. Note the large throg button
THE
BLADE: The moderately curved, single edge blade, with a single large, 22 1/2″ x 3/4″ fuller has been polished some
time in the past. There are no markings. There is some minor pitting.

Polished
blade has minor pitting which looks the same on both sides THE
SCABBARD: The black leather scabbard has its original hardware, but the leather has been refreshed so that it is
like new. It is complete with its single mounting, including the tip all of which have a nice silver appearance. BRIEF
HISTORY: The likelyhood is that this saber is from the English Ketland firm. William Ketland & Co. was active
in Birmingham, England as a gun maker as early as 1780. The father and grandson, both William, had died by 1804 and the firm
passed to a brother-in-law, Thomas Izon, who traded under the Ketland & Co., name until 1831 when operations ceased. Sword
making by the firm dates from the earliest days of 1804 as part of Izon’s success in dealing in the American Trade. He likely
had help of family members, John and Thomas, living in Philadelphia and importers such as G. Upson in New York.
DIMENSIONS: Length in scabbard overall 33″ Length of blade 32 3/4″ Width 1 1/8 Thickness
3/16″ Length overall 38″ The hilt is 5 1/2″
Weight Saber 1 lb 7 oz Weight scabbard 5 1/2 oz

Mount complete with suspension ring. Note this is white brass that looks silver