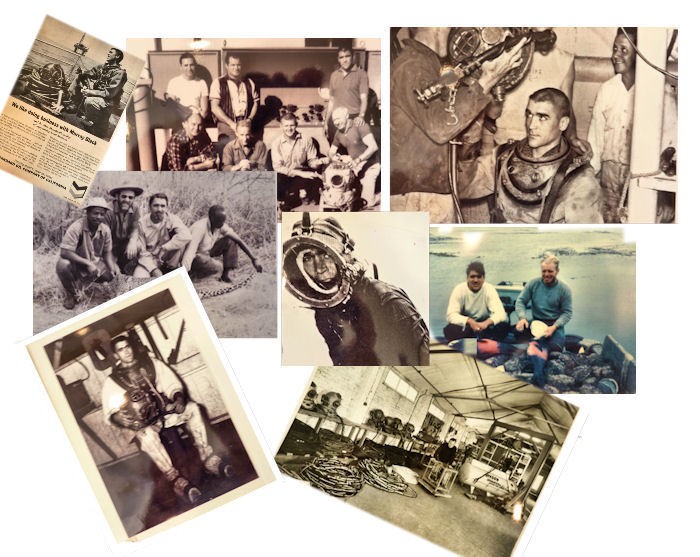 Memorializing One of the Greatest Hard Hat Divers of our Time, a Commercial
Diving Hall of Fame Honoree!

I didn’t know Murray, but I wish I had. My impression
from reading about him, and discussing his life and accomplishments with a member of the family who provided advise and guidance
is to conclude he was as a larger-than-life figure in the genre of the Indiana Jones movie character or a young Earnest Hemingway,
always on the move with new worlds to conquer. 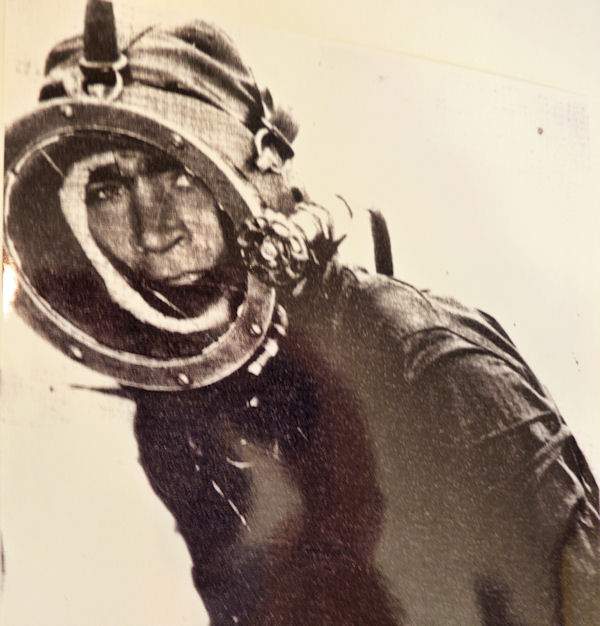 Presented are a variety of originals and copies of photographs, advertisements, newspaper
articles, a DIVCON company brochure, personal resume, and Murray Black’s hardcover autobiography, “Between
the Devil and the Deep” all formerly the property of a family member of the deceased. It is only with deep regret that
these items, accompanying Black’s Miller-Dunn MK V helmet, are being sold. (See detailed inventory at end of this listing)

Born on February 16,
1930, in Woodbury, N.J., he died on March 21, 2004. His early years were spent in Sacramento, CA., and Woodbury, NJ. He was
an unruly young kid who did not take well to college, and under family pressure, found himself enlisted in the US Navy in
1948 as a Special Enlisted Volunteer with only an 18 month tour of required duty. In November 1951, shortly after discharge,
he entered the E.R. Cross owned, Sparling School of Deep Sea Diving in California, where he excelled, graduating a year later.

His first diving job
was as an abalone diver harvesting from San Diego to Santa Barbara. After some years of earning up to $200.00 per day, he
once again found himself in financial and legal trouble due to his unruly impulsiveness. As a consequence, he lost his boat,
his fishing license and was placed on court probation. He moved to Ft. Lauderdale, FL to get away.

Following where the
work was he moved from dive job to job, including such places as Santa Barbara, CA; Talara, Peru; London, England; and Tripoli,
Libya. In 1956, while back in Santa Barbara, he quit abalone diving, and became a commercial deep sea diver for the W.W. Rand
and Submarex Corporation, the first offshore drilling contractors in California.

Late in 1956, he also
joined forces with Charlie Isbell and other experienced divers and formed Associated Divers specializing in underwater drilling
work. Their timing was perfect. They rode the crest of the boom in this field with their headquarters based in Santa Barbara.
This soon became the offshore oil capital of California with Associated Divers leading the way with their innovative use of
decompression chambers, and their knowledge of handling and maintaining blowout preventers used during drilling operations. 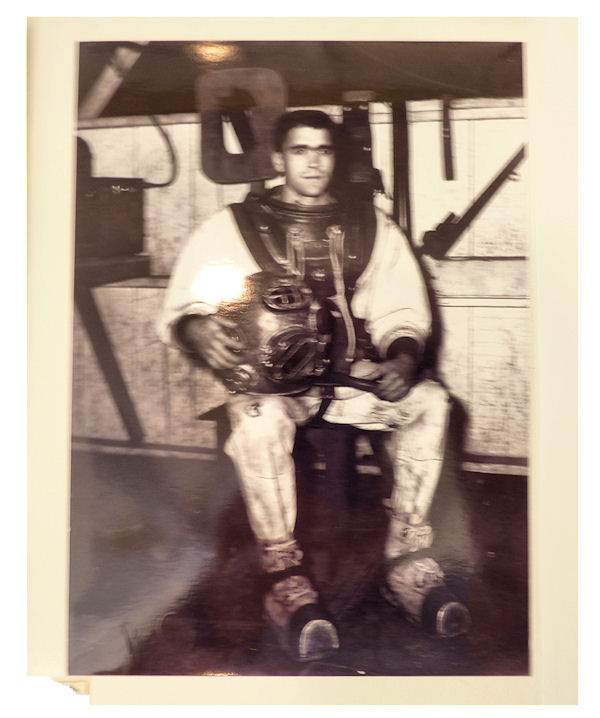 1956, 1957, and 1958 formed the foundation of Murray’s diving career. With Santa Barbara as the hub, he did 190
working dives in 1956 and 212 dives in 1957. Depths ranged from 245 – 252 feet with approximately 50 minutes of bottom time.
As a result of Associated Diver’s close working relationship with Richfield Oil Company, they landed a contract in February,
1959, and Blackie was off to Talara, Peru. At age 29 he was making good money and one of his main objectives was to stay out
of jail. Upon the Richfield jobs’ completion, he returned to Santa Barbara for a brief stay until returning to work on a new
Peruvian Pacific contract. He then started a second Richfield contract in March, 1960, which lasted for two years with almost
half the years spent underwater drilling commercial oil wells and hooking them up to onshore pipelines. At least three times
he was subjected to the bends. 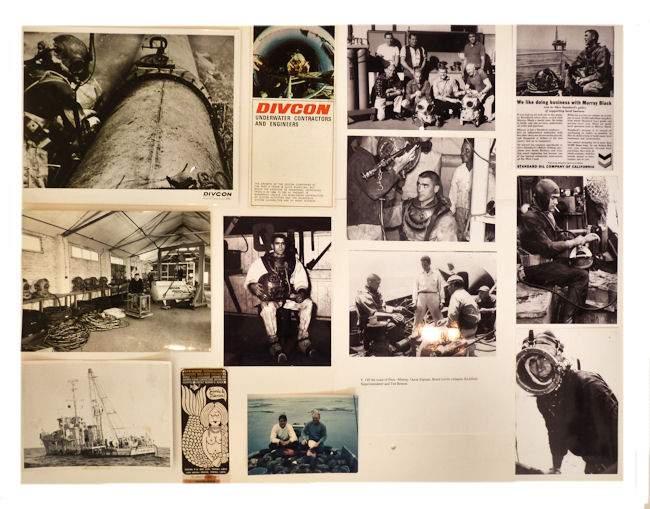 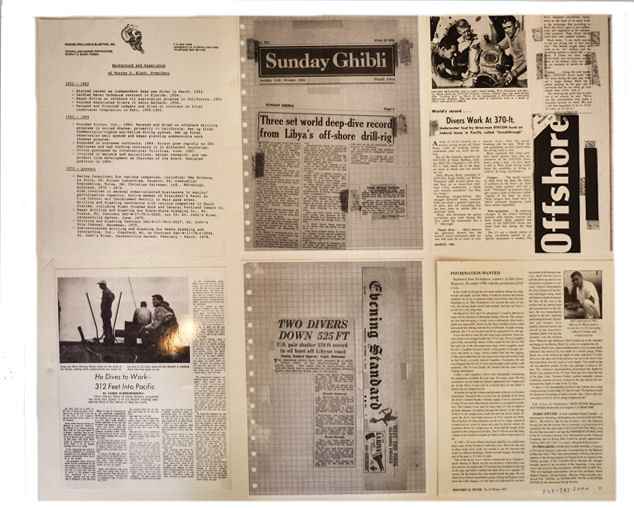 Impetuously, he resigned from Associated Divers, the company he had helped found, over a minor difference
of opinion, and embarked on becoming a diving contractor on his own. In 1962, he formed DIVCON, Inc. short for “Diving Contractors”
and began operations doing deep sea diving. The company started during the early stages of using Helli-ox mixtures for deep
dives in which Black and his crews became expert.

Thus, DIVCON was in on the cutting edge of the development and use of Helli-ox development working closely
with Gene Mogis and CAPT Albert Behnke, Medical Corps, USN, the father of the Navy’s deep sea diving and one of DIVCON’s top
advisors. In August of 1964, Murray Black, Walter Thompson and Gene Gallagher made four major dives off Tripoli to recover
some equipment where Black set a record of 525 feet using Helli-ox. DIVCON also was one of the first to use submersible chambers
as work stations and for decompression.

The company grew rapidly and at its peak had 350 employees with
offices in ten countries and active jobs in 23
counties. It was the largest underwater diving company in the world.In June, 1967, Black sold the
company to International Utilities, and shortly thereafter was moved into the role of non executive chairman of the board
not having maintained voting control. No longer involved in underwater operations, he resigned in 1969, and at age 40, was
out of a job. With money in his pocket, he moved to La Jolla, CA and took up cattle ranching, a losing proposition, and with
other bad investments went broke.

As Black’s luck would
have it, in 1975, Karl Bauer of Trans-State Dredging Company of Ft. Pierce, FL contacted him to work on the Jacksonville Harbor,
St. Johns River project. Black picked up and moved back to Florida, this time to Jacksonville. Thus began a twenty year association
with Bauer in which he specialized in explosive diving and built a second successful career, and with it financial success
receiving million dollar bonuses for finishing all his jobs early.

Around 1995, family
interests called him back to California. He died there on March 21, 2004. Along the way, he traveled to exotic places, took
up trophy hunting wild life in Africa, India, Alaska, Australia, and elsewhere, living life to the hilt. 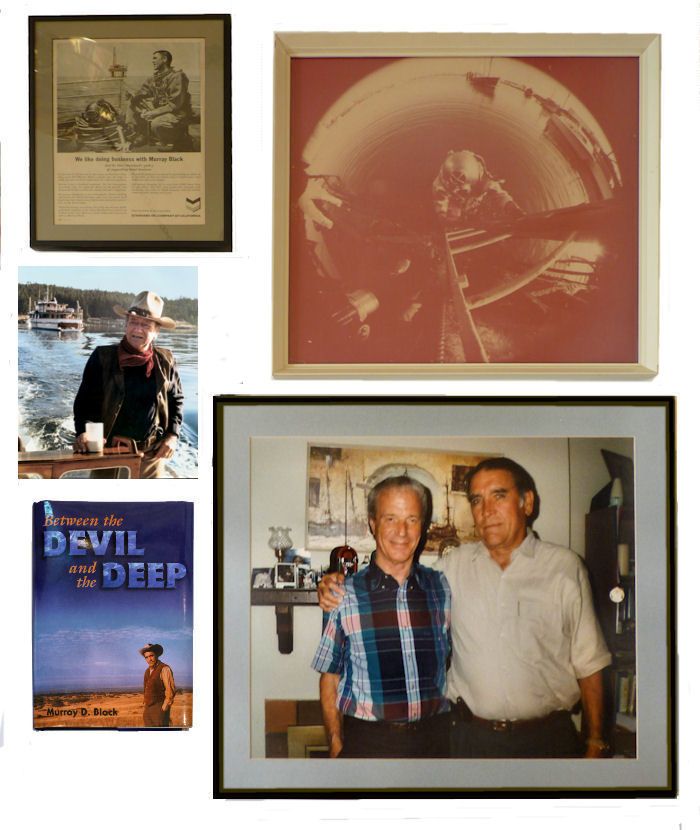 Murray had a knack of befriending men with like passions. He had some noteworthy ones outside the field of commercial diving.
First among them was aquanaut and astronaut, Navy commander, Scott Carpenter who was a Navy SeaLab II and III diver before
he was a Mercury Astronaut and commanded the Aurora
7 spacecraft . They were best friends from the time they first met in London in 1962 while both worked part
time for Standard Oil. Scott used to tease Blackie by calling him “The Second Greatest Deep Sea Diver in the World”, with
himself as the first. Scott also, assisted Blackie in becoming a member of the prestigious Explorer’s Club. Later, while living
in Southern California, he crossed paths in 1972 with actor, John Wayne when both invested in the same startup company. They
became close friends, partied, and played lots of bridge together. They cruised frequently to Mexico in Wayne’s WW II mine
sweeper converted into a yacht, “The Wild Goose”.

INCLUDED ONLY WITH THE SALE OF
HIS MILLER-DUNN MK V HELMET ARE:

A loving member of his family

OUR
UNCONDITIONAL NO NONSENSE GUARANTEE: If not completely satisfied with your purchase it may be returned within
five days of receipt in its original packaging if without damage. Return items must be insured for their full value. Only
a prior email authorization from us for the return is required. Shipping charges are included in this offer if an error is
due to our fault within the continental United States.