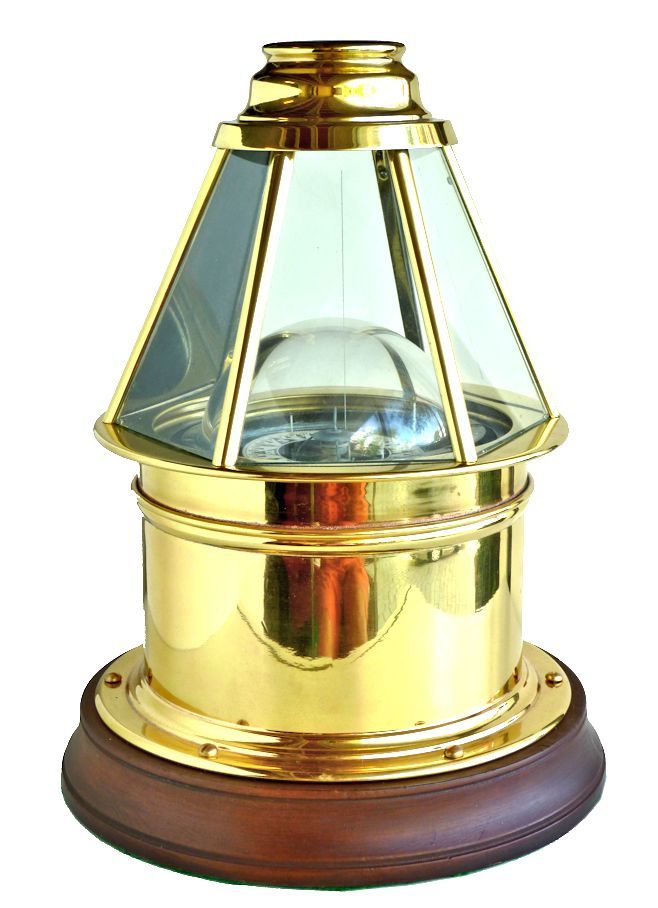 PRESENTED is
a large size skylight or cathedral binnacle with an original Spherical
Compass that was invented by Wilfrid O. White. The design dates to
January 6, 1931 with Patent number
1987383 granted on January 8, 1935. This is not one of the later
versions, but an original, and sold under the Kelvin-White brand name
indicating the association White had with William Thomson, Lord Kelvin.
The main feature of this compass was that the sphere magnified the size
of the compass card substanially. In this case, when the bowl is filled
with fluid, the actual compass card is 3 1/2″ in diameter, but appears
to be a 5 1/2″ card when viewed. The base of the compass bowl is fitted
with a frosted lens which allows lighting the card from beneath, but no
internal light was fitted. A hard to find night shade is
included. It is in the preferred brass finish with six panels
one of which acts as a filter. Two of the panels have an etched vertical
line to allow for taking bearings, and the black filter is used when
taking amplitudes of the sun to determine compass error or as sun shade.

Binnacles such as these
became very popular starting in the 1920’s. Their popularity may have
increased after one was seen aboard the motor vessel “Santana” in the
movie “Key Largo” (1948) staring Humphrey Bogart and Lauren Bacall.
Bogie also had one in the cockpit of his famous yawl Santana. Here it is
shown covered with a chrome hood. And for those interested, we installed
one on our ketch Bagheera which served us well during seven years of
ocean cruising. PERKO discontinued making them about 1954, and Ritchie
did the same. Thereafter, the only source of skylight binnacles was from
Danforth priced at $3400.00, until they discontinued all compass
production in December, 2009. In May, 2011 Ritchie Navigation introduced
a new skylight binnacle under the Heritage Brand. It was priced at
$3600.00 in chrome.
CONDITION: After all these years, the
condition is exceptional, and everything is almost in “like new”
condition with the compass working properly. There are four lubber pins
one at each primary heading of 90 degrees, one of which is broken off at
the level of the card. As fitted by Kelvin-White, the panes are
Plexiglas, but are in great condition. The compass was recently cleaned
and its paint freshened in our shop, and the binnacle was professionally
polished and lacquered for your enjoyment. The compass is being sold for
display. Its fluid has been removed to preserve the card, and it is not
intended to be used at sea in this condition. It can be made sea ready
by simply adding a mixture of 1/3 alcohol and 2/3 distilled water. There was
no lighting fitted by the maker. However, an electrician can fit a
receptacle for lighting from the bottom or one can be installed from the
top. 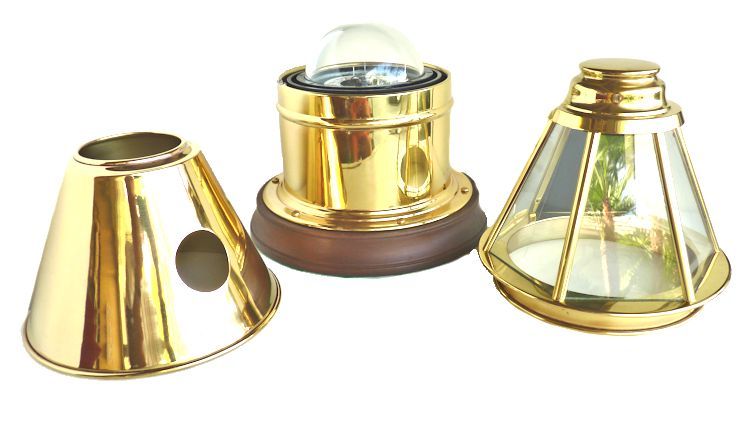 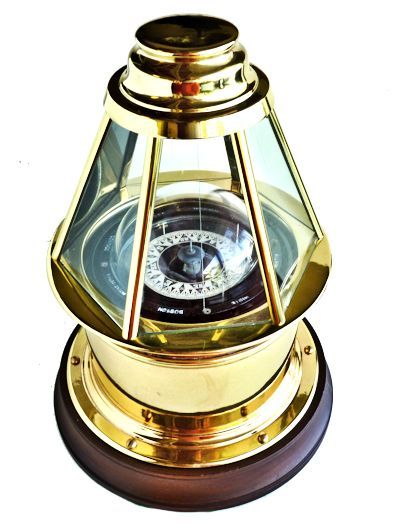 Looking down
from
above

PROVENANCE & BRIEF HISTORY: Wilfred O.
White had a rich nautical family history, descending from a shipbuilding
family that dated back to 1600 England. Born in Melbourne Australia,
White came to the United States in 1898 and married Ruth Eldridge, the
daughter of George Eldridge, who charted the first tide and current
tables in U.S. White had studied with the Scottish Lord Kelvin of
compass fame for a year or more in Glasgow in the very early 1900’s.
Kelvin’s work on magnetic compasses goes back to 1870, and the result
was quickly adopted by the world’s navies. After Kelvin’s death in 1907,
White was chosen to be Kelvin’s exclusive agent in the United States by
Kelvin’s successors and partners, Kelvin, Bottomley & Baird. The
Kelvin & Wilfrid O. White and Co. commenced operations in 1918.
White, reportedly, had to pay LIST price, in advance with his orders.
This became a thorn in Wilfred’s side, and it ultimately lead him to
develop his own design improvements which were marketed under the Kelvin
– Wilfrid O. White brand. He invented the spherical compass in 1931 and
received his US Patent in 1935. His son Wilfrid Gordon later improved
upon it’s design in the 1950’s. The Wilfrid White company sold out to
the Eastern Company in 1961 which consolidated it operations with
Danforth’s Marine Hardware, first in Naugatuck, CT and then moved the
Danforth- White Division to Portland, ME in 1961. Compasses continued to
be produced under the Danforth – White label. In the 1970’s Danforth
dropped the Danforth – White brand and marketed their compasses as
Danforth. In 2009, Danforth ceased compass production entirely.
This example dates all the way back to the
introduction of the spherical compass and should be highly prized if
used afloat or ashore. 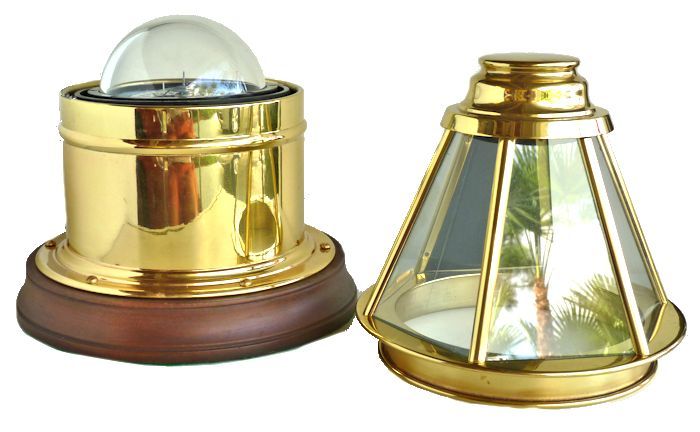 This rare
Skylight or Cathedral binnacle is ready to go back to sea or it is
suitable as a gift or as an addition to any collection of fine marine
artifacts. 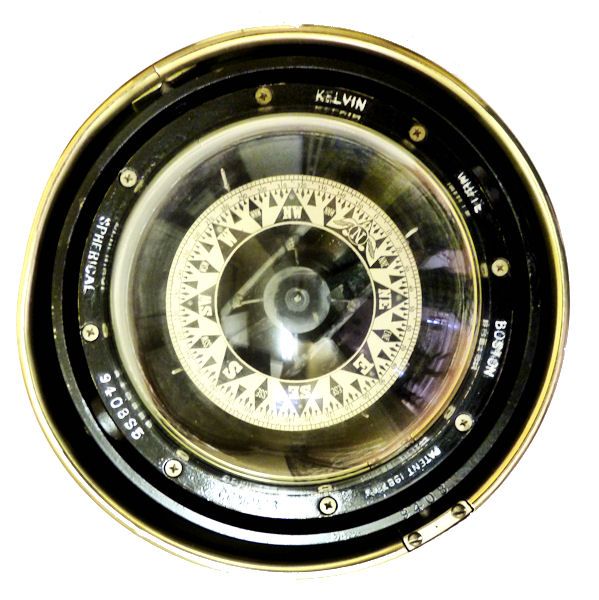