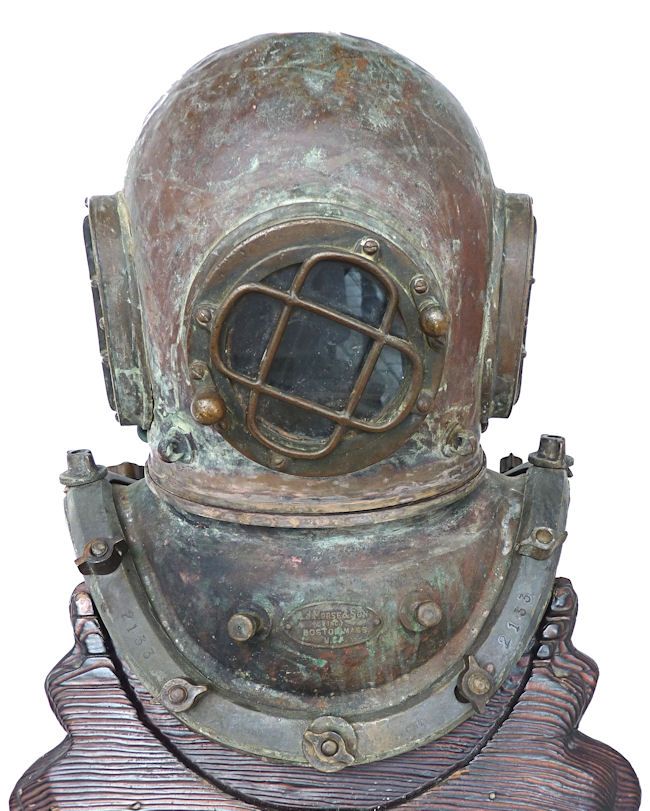 DIMENSIONS OF HELMET:18” H x 15” W x  14″ D  WEIGHT 37
lbs
STAND NOT INCLUDED Copyright
2012 by Land And Sea Collection™, All Rights Reserved Presented is an interesting 3 light commercial diving helmet made by A. J. Morse & Sons,
Inc., and carrying serial number 2133 with matching numbers throughout. The reddish brown color varies from medium to
dark brown with tinges of black in the overall patina. There are numerous small dents all over the bonnet. What sets these
early style commercial helmets apart from the later versions is that their sidelights are rectangular and stand upright. This model
helmet appears in the 1910 Morse catalog on page 35, but was known to be around around years before. 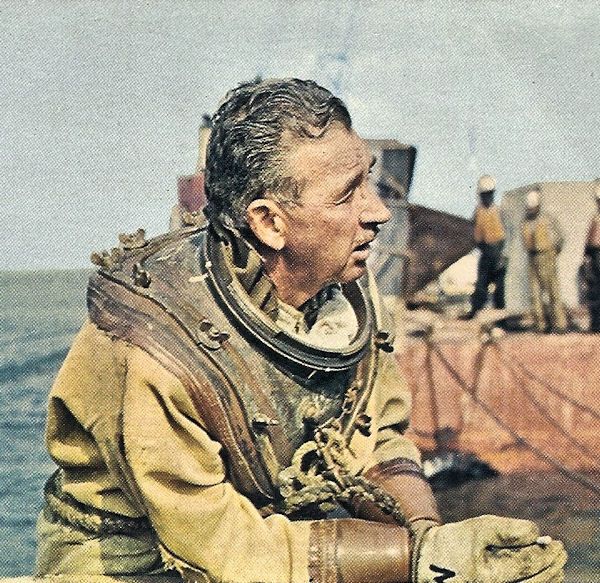 PROVENANCE: now deceased. His name and biography will accompany the helmet. He was born in 1901, and started commercial diving at
an early age. The family says that he acquired the helmet in the early 1930’s and that it has been in his or their possession
ever since. Most recently it was the property of his grandson. In his early years, he operated a boat yard in Palm Beach County
using it throughout the Florida Keys and South Florida. In 1942, he
was one of the divers that helped with the righting of the TSS Normandie in New York City where this hat was used. In 1948, he
traveled to Guayaquil, Ecuador, for an underwater pipe project. During the
Savannah Bridge in Georgia,  an I-Beam fell of a derrick and cracked the helmet while he was under water. He also helped build
a dam and a bridge in Brazil, and afterwards worked on the Panama Canal Locks. This helmet was also used building the
Mackinac Bridge in Michigan.  And, in building the Hampton’s Roads Tunnel in Norfolk, Virginia, the Chesapeake Bridge
Bay Tunnel and many other maintenance and construction jobs through out Florida and South America. He retired in 1963 and
died shortly thereafter. 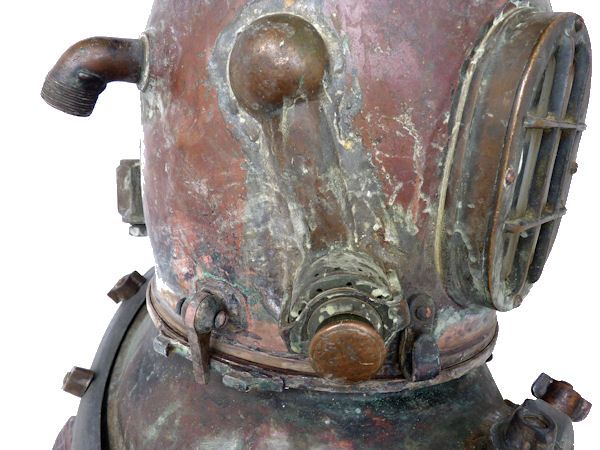 Exhaust, drop down lock, intake elbow
all work
Like
all used diving gear, this is being sold for DISPLAY ONLY. It should not be dived without having passed inspection by a certified
dive shop. 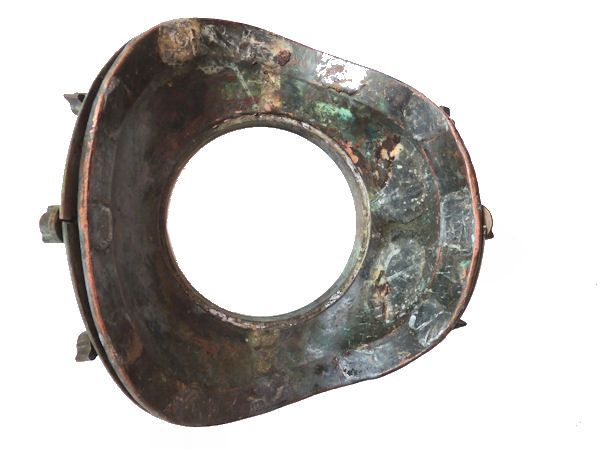 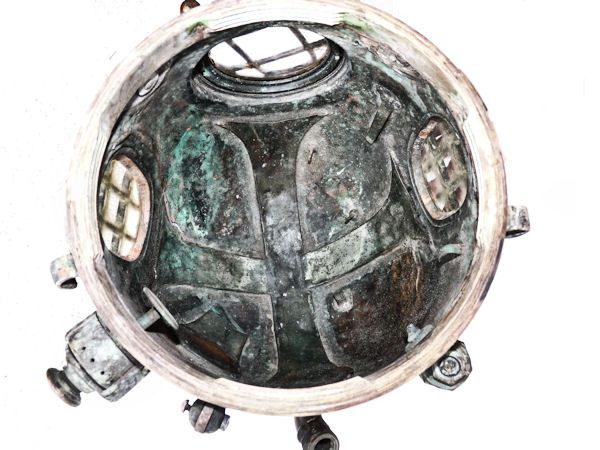 Inside of bonnet CONDITION:
The front door unscrews and the early style exhaust valve wheel turns. The air
passages are all intact. The chin button is in place and functions. Field repairs were made to stop leaking, and a
long gash on the left side was reinforced with solder. The brailes, are a later replacement, as is the Craftsweld communication
box that was added sometime in the past. The bonnet shows numerous small dents in
the front and on top. All the port looks to be original. 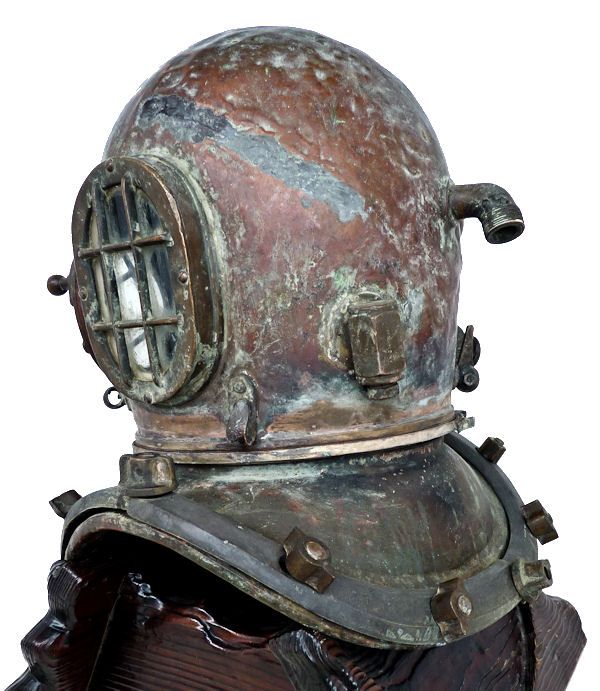 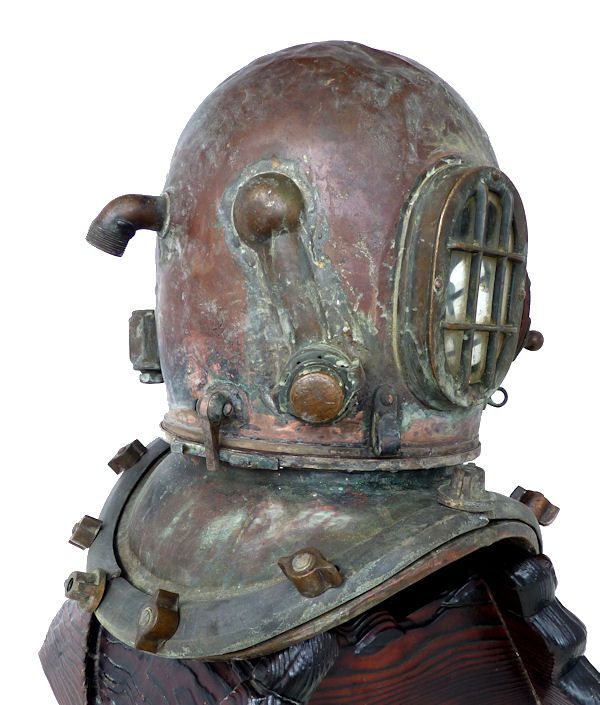 A Craftweld comm box is on left side
of back . Drop down lock on right MARKINGS:
The Morse name tag reads A.J. Morse & Son, Inc., Boston, Mass., USA, on four lines. The number 2133 appears
on both the upper and lower neck rings and on the top of all four brails. The two front brails are stamped “front”. 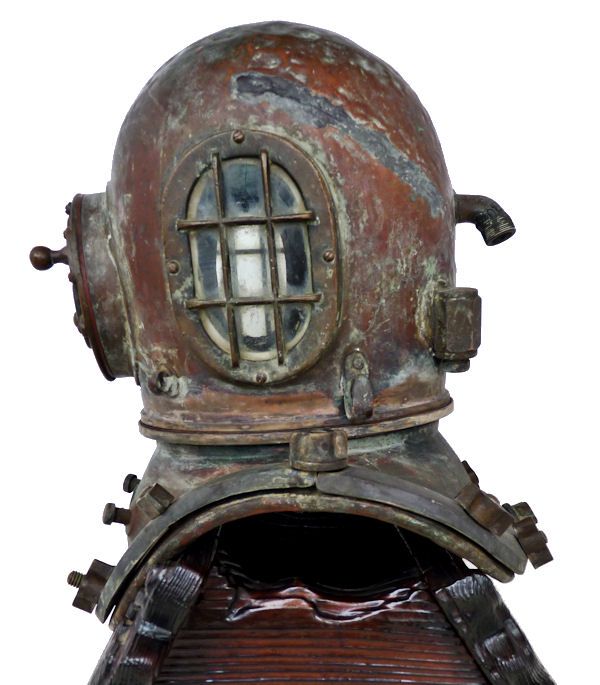 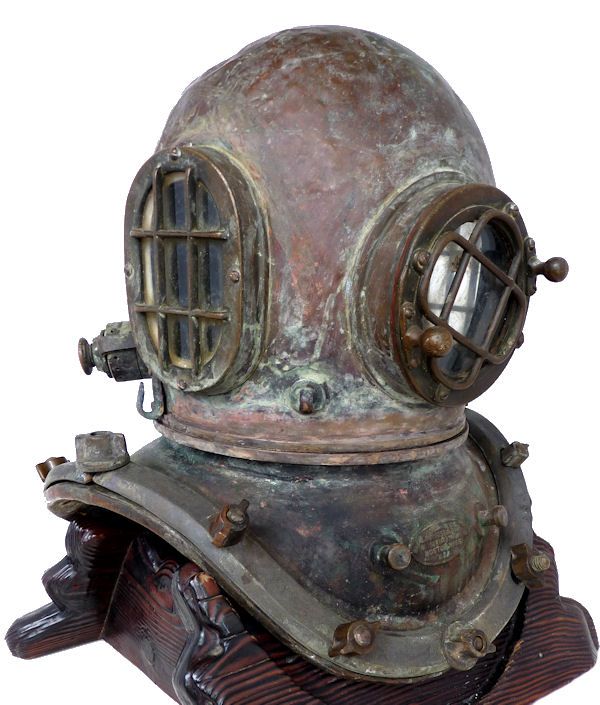 HISTORY OF MORSE
DIVING: In the arena of deep sea
diving, there are few companies with the longevity and history of Morse Diving. The company was founded in 1837 as a Boston
maker of brass ware, three years before Englishman Augustus Siebe manufactured its first closed air dive helmet. During the
Civil War, the firm commenced building maritime fittings and began experimenting with early underwater hardhat designs from
Siebe-Gorman and other pioneering makers. In 1864, Andrew Morse bought out his partner, introduced his sons into the business,
and began to focus on creating new products for underwater salvage expeditions. Morse was the first company to make the Navy
MK V helmet, starting production in 1916. As their expertise and experience grew over the years, they developed a worldwide
reputation as a major supplier of hardhat diving apparatus. Morse continues in business today in Rockland, MA. 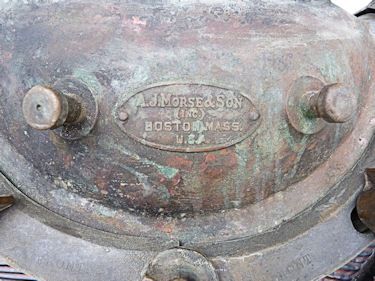