Backboard: 56″
L x 12″ H x 1″ T Half Hull: 47 3/8″ L x 5 1/2″ D x 6″ Depth Weight:
27 lbs Presented is a large size builder’s model of a whaleship of mid 19th Century design that was
made to commemorate the launch of the whaling schooner Addie M. Chadwick in East Boston, MASS in 1864. The ship registered
338 tons, was 118 feet long with a 30 foot beam and drew 11 feet. The New Bedford Whaling Museum in their research states
that the average size whaler of this period was about this size. The
half model is made of 10 lifts (one plank each) of knot free wood. The entire model is varnished which, over the many
years, has taken on a rich golden patina of age.
It has a straight fore foot, apple crate style bow, round bilges, rectangular center section, and deep underbody to maximize
carrying capacity. The 47 3/8 inch hull is mounted on a backboard 56″ long, which is finished in black
paint. The vessel’s name is painted in white on the stern quarter.  CONDITION: In overall excellent condition considering its age.
Expect to find some some abrasions, nicks and some age cracks in the wood. The name has some loss of paint. There is a cover
board on the deck which hides the fittings. It is held down in some places by old brads. The same is true of the cutwater
and the rudder’s skeg. All of these date back many years. The varnish is in good condition and has a pleasing golden tone
acquired over the years. In summary, a very fine half hull of a known ship.

Showing views from
fore and aft with round bilges and flat topsides THE SCHOONER
RIGGED WHALESHIP: In the photograph below, the arrows point to the two masts with their booms making this a
wood hulled, schooner rigged whaleship similar to the Addie M. Chadwick. Because Chadwick was much larger than the
normal schooner rigged whaleships, she would have carried more boats, and crew and sailed on longer voyages. Generally, schooners
were the smallest of the whalers, usually with two masts and four-and-aft rigged sails, frequently with square topsails, and
carrying two or three whaleboats. Six months was the ordinary length of voyage, and most schooners were employed in the Atlantic.
Although the schooner was employed throughout the history of Yankee Whaling, it was especially favored in the later period
(1890-1925), because it was less expensive to outfit and crew. The picture below was taken in Nantucket, MASS by
Josiah Freeman around 1885. 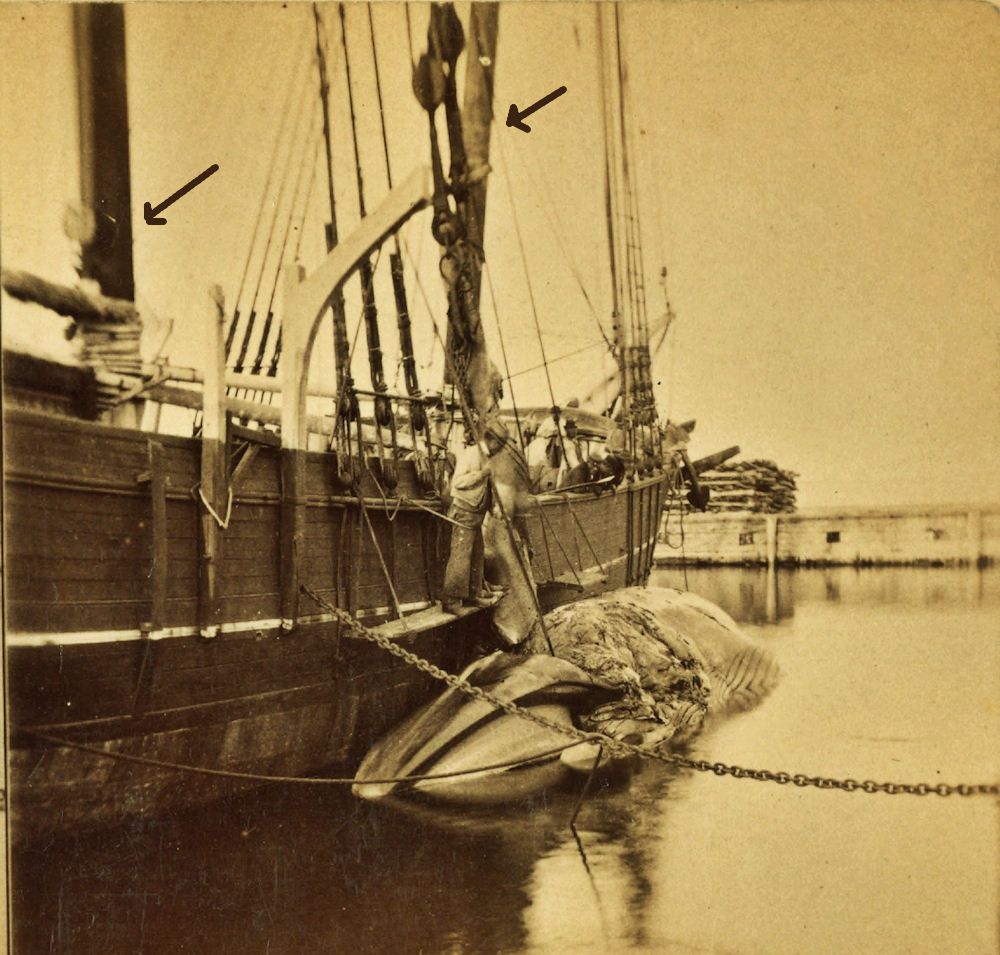 PROVENANCE:
Bought in New England at auction. Formerly owned by a highly respected collector of marine antiques with a specialty in half
hull models. HISTORY OF SHIP: There are 33 references, from 1865 to 1888 of
the Addie M. Chadwick in Lloyd’s Register of American and Foreign Shipping and she is mentioned in the
Shipping News of the New York Times. Little beyond that is known of the background of the whaleship Chadwick. No
owner or captain is given as of the date of her launch, so the shipyard must have built her on speculation. Chadwick
is listed in Lloyd’s Register under only a few owners and a number of different captains. For example, in 1866,
her first owner was listed as Paine & O, and her captain as Bentley. See  Her last entry in 1887 shows Chase as her captain and G.P. Thatcher as the owner. See  After 1888, she is listed no longer in Lloyd’s, and her disposition is unknown.

Showing the
stubby shape of a typical whaler design 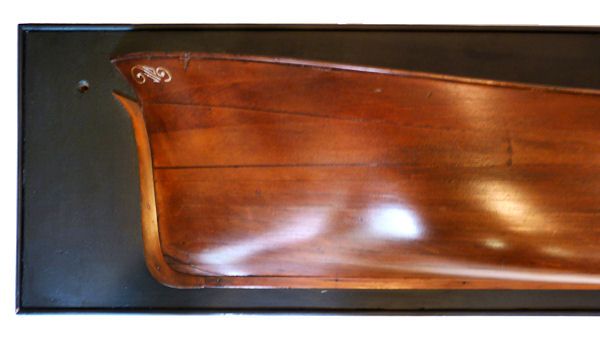 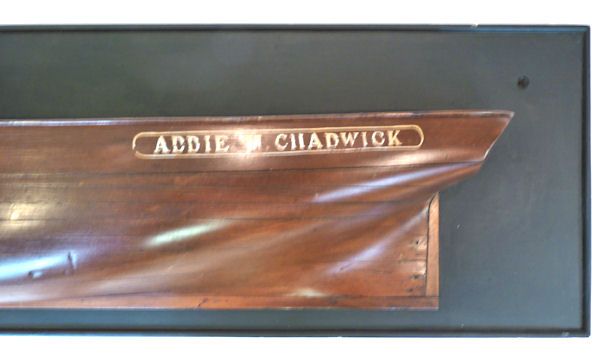 Detail of bow and stern quarter

Back of backboard. Arrow points to name written in
pencil