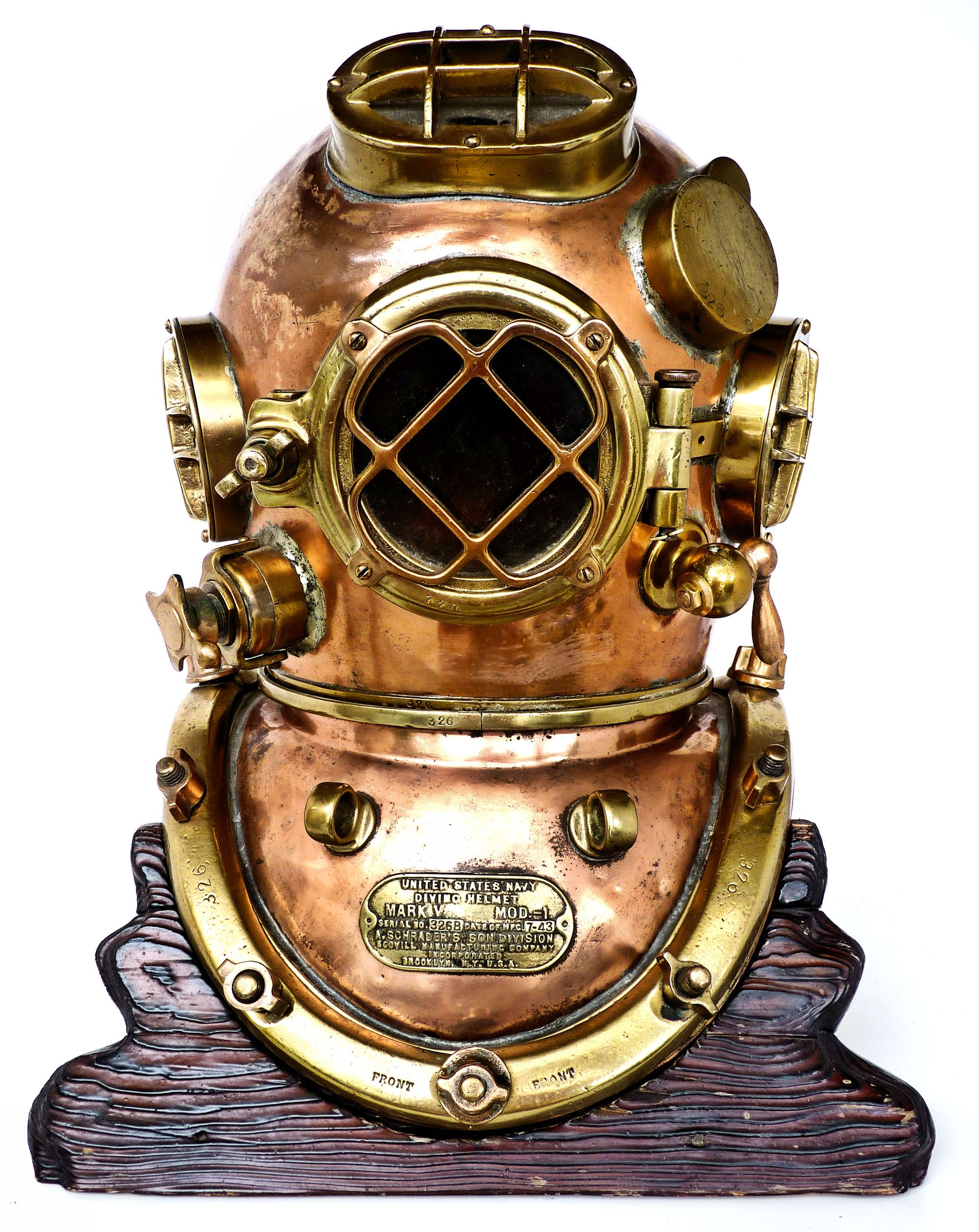 Schrader was one of the original maker’s of Navy MK V’s
during WW II.
Owned for the last 52 years by a Navy Officer and Enlisted Master Diver.

Copyright 2012 by Land And Sea Collection™, All
Rights Reserved

Presented is a high quality U.S. Navy MK V helmet
made by Schrader in 1943 that comes from the Estate of a career Naval Officer who joined the Service as a young man in 1945
as a seaman recruit. During the course of his 29 year career he rose through the enlisted ranks, became a master diver, Heliox
diver, and then as a commissioned officer advanced in rank to a diving officer, navigator, executive officer and finally as
a lieutenant commander was the captain of a submarine rescue ship. Along the way he served in surface ships and submarines
and is said to have been the first to dive in the freezing waters of the Arctic Circle in 1962. He retired in 1974 as a lieutenant
commander after serving two years as the commanding officer of the USS Florikan (ASR 9) a very rare job for a former enlisted
man.

HELMET & MARKINGS:  Authentic 12 bolt, 4 light Schrader Navy MK V dated AUG
1943 with serial number 326 B on the maker’s tag. All the brails are marked 326 and the lower and upper neck rings of
the breast pate and bonnet are stamped the same. There is the Navy Inspectors mark of a “U anchor S” on the top of the speaker
housing, and 326 is on the opposite end. 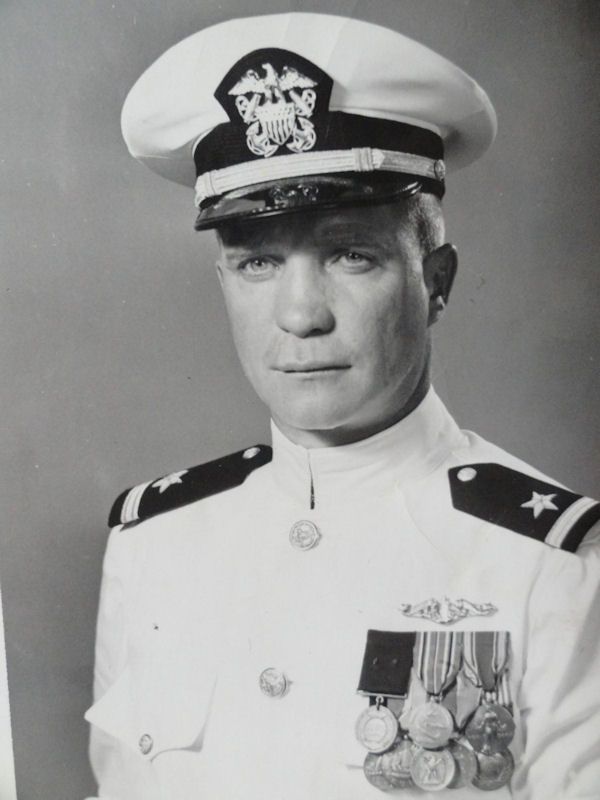 He retired from the Navy on Sept. 1, 1974 as a Lieutenant Commander, but continued his seagoing career in
the Merchant Marine for 20 more years sailing the world’s oceans. He commanded oceanographic research vessels for Nekton Inc.
of San Diego and commanded vessels for Lloyd’s of London Insurance Co.
He died in Las Vegas, NV on July 1, 2005 at age 76, and his ashes were buried at sea in the Pacific during
a shipboard ceremony by the U.S. Navy.

CONDITION:
Considering its 69 years age and use, it is in absolutely fine condition overall. Years ago, the helmet was lacquered
and some of the coating is abraded. There are the kind of dents and abrasions that are there from use, the largest two of
which is on the upper left.  The air vents are all intact.The right side chin relief valve, spit cock handle, front door wing
nut, all turn easily. The speaker housing is empty. No check valve is fitted, and neither the comm or
the air elbow have a nut.

Everything you can think of has a 326 stamp and the customary inspector’s
cartouche.

Like all used diving gear, this is being sold for DISPLAY ONLY.
It should not be dived without having passed inspection by a certified dive shop.

HISTORY OF SCHRADER DIVING: Schrader is one of the oldest names in U.S.
diving, second only to Morse. The founder, August Schrader was a creative and inventive German immigrant who originally set
up a shop dealing in rubber products in New York City, NY .

In 1917, the United States Bureau of Construction & Repair introduced the MK V helmet and dress, which then
became the standard for US Navy diving until the introduction of the MK 12 in the late nineteen seventies. Schrader and Morse
Diving were the two original suppliers.

BRIEF HISTORY of NAVY MK V DEEP SEA DIVING DRESS:
By 1915, the Bureau of Construction and Repair had designed the MK V Diving Helmet which seemed to
address many of the problems encountered in diving. This deep-sea outfit was designed for extensive, rugged diving work and
provided the diver maximum physical protection and some maneuverability.
The 1915 MK V Diving Helmet had an elbow inlet with a safety valve that allowed air to enter the
helmet, but not to escape back up the umbilical if the air supply were interrupted. Air was expelled from the helmet through
an exhaust valve on the right side, below the port. The exhaust valve was vented toward the rear of the helmet to prevent
escaping bubbles from interfering with the diver’s field of vision.
By 1916, several improvements had been made to the helmet, including a rudimentary communications
system via a telephone cable and a regulating valve operated by an interior push button. The regulating valve allowed some
control of the atmospheric pressure. A supplementary relief valve, known as the spitcock, was added to the left side of the
helmet. A safety catch was also incorporated to keep the helmet attached to the breast plate. The exhaust valve and the communications
system were improved by 1927, and the weight of the helmet was decreased to be more comfortable for the diver.
After 1927, the MK V changed very little. It remained basically the same helmet used in salvage operations
of the USS S-51 and USS S-4 in the mid-1920s. With its associated deep-sea dress and umbilical, the MK V was used for all
submarine rescue and salvage work undertaken in peacetime and practically all salvage work undertaken during World War II.
The MK V Diving Helmet was the standard U.S. Navy diving equipment until succeeded by the MK 12 Surface-Supplied Diving helmet
in February 1980, which in turn was replaced by the MK 21 in December 1993.