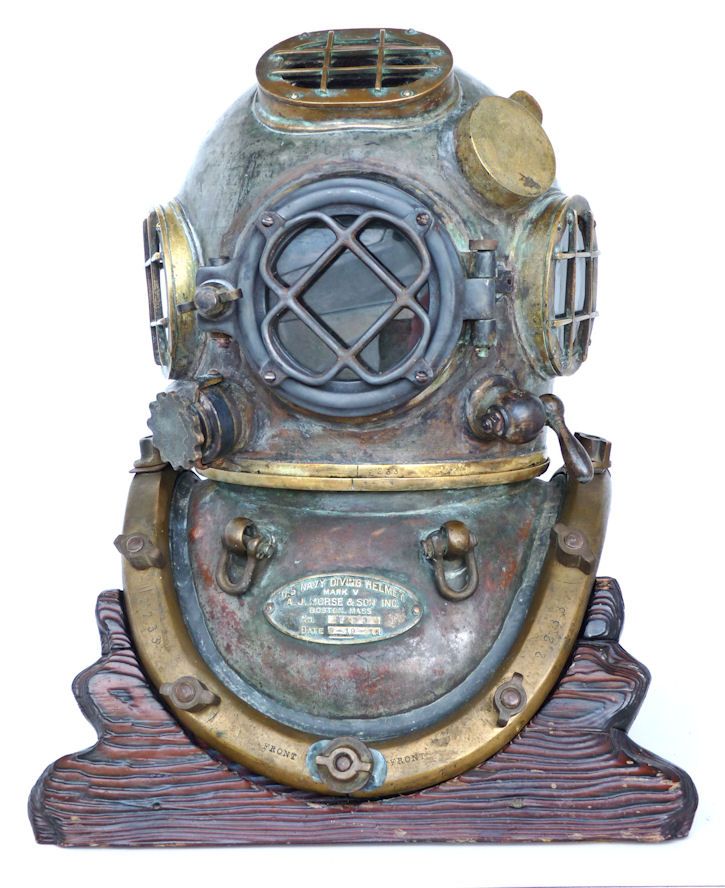 Presented
is a very rare 12 bolt, 4 light Morse Navy MK V diving helmet that was made in 1916, thereby being one
of the earliest MK Vs built. It is the first of the early helmets that we have seen in two years, though our records
show we previously sold three early ones. They were a 1918 Schrader MK V, a 1919 Morse MK V, and a second 1919 Schrader
MK V retrofitted with a Heliox system, but this is the only 1916 we have had the pleasure of bringing to market. Having
a 1916 Morse for sale is a major event because even though Morse was one of the original Navy suppliers of the MK V Diving
System, very few of their early MK V helmets are seen on the market, making this a choice for a serious collector. The stand
is not included.

THE EARLY MK V HELMETS (1916-1917): Morse was the original maker of the MK V with Schrader following
close behind. We know from other MK V helmets we’ve sold that Morse sometimes used Schrader parts and vice versa. It may be
that the Navy Policy required a second supplier and that Morse helped them get started. The earliest known MK V is SN 2204,
with 2211 following close behind. It has been suggested by others that 2200 may be the starting point of MK V production.
In this first group were certain prototype, pre-production or experimental models. Morse thinks, as we do, this
model was an experimental variant. Known MK V SN 2374 dates from November 2, 1917, which gives you an idea of how few of these
helmets were made in 1916.

ANCHOR MARK AND SERIAL NUMBERS: There were no Navy Inspector
marks as shown in the picture at left on the early issued helmets, so the fact that one does not have the mark is to
be expected. Morse records show that SN 2233 was made on September 19, 1916. The serial number appears on both
neck rings, and on the top of all of the brails, as well as on the maker’s tag. The early MK V’s that were still in service
during WW II may carry an inspectors mark if they had work done by a Navy contractor.
PROVENANCE: This helmet, and a Morse 1 A dive pump which we
also have for sale, was originally purchased by a collector with wide ranging interests, from the Naval Post Graduate School
in Monterey, California, in the early 1950’s, and then were sold to an equally eclectic collector around 1991,
as his first and only diving equipment purchase. The first private party owned the helmet for about 39 years, and the second
private party for about 21 years for a combined 60 years in private hands. This leaves the 96 year old helmet in
Navy possession for 36 years.
CONDITION:  This bonnet is 96 years old, and before being sold to private
parties, was in Navy service and at the Naval Post Graduate School for 36 years. Morse believes it was originally made as
an experimental design, as it had some none standard features such as the placement of both elbows. The brails are rounded
not flat. It also had some Schrader parts which we have seen used before in early Morse MK V helmets. As far as possible,
the helmet has been restored to conform with the 1916 design as was officially adopted. The dumb bell lock,
as with all early helmets, does not have the hinged safety keeper which was adopted in 1934 from a BTE design. The helmet has about
95% tinning, but the tinning has some black streaks which remain after cleaning. There are some shallow dimples on the
top back that may not show in the pictures because of the tarnished tinning. Also expect some other normal marks of age and
handling. All the air passages inside are intact, and the exhaust wheel and button works. The helmet is in
very good condition overall, and is complete including a WW II issue speaker which is loose in its keepers. The serial number
appears on the tag, on all the brail tops and the neck rings. The check valve stamping is unclear, but may be
a Schrader.
It is being offered as a display item only,
and should not be used for any other purpose unless certified by a competent diving shop.

HISTORY OF MORSE DIVING:
In the arena of deep sea diving, there are few companies with the longevity and history of Morse Diving.  The company
was founded in 1837 as a Boston maker of brass ware, three years before Englishman Augustus Siebe manufactured its first closed
air dive helmet. During the Civil War, the firm commenced building maritime fittings and began experimenting with early
underwater hardhat designs from Siebe-Gorman and other pioneering makers. In 1864, Andrew Morse bought out his partner, introduced
his sons into the business, and began to focus on creating new products for underwater salvage expeditions. In 1904,
that firm became A. J. Morse and Sons, Inc., under which name it continued until 1940.  Then the name Morse
was re-incorporated as Morse Diving Equipment Company, Inc.  Finally in 1998, the company changed owners, and became
Morse Diving Inc.
As their expertise and experience grew over the years, they developed a
worldwide reputation as a major supplier of hardhat diving apparatus. Morse was the first company to make the Navy
MK V helmet, starting production in 1916. During the onslaught of World War Two only Morse and then Schrader were making dive
helmets for the Navy. Desco and Miller-Dunn went into production around 1942 or 1943. In total only about 7,000 MK V helmets
were produced by all four companies during the war years.

BRIEF
HISTORY of NAVY MK V DEEP SEA DIVING DRESS:
By 1915, the Bureau of Construction and Repair
had designed the MK V Diving Helmet which seemed to address many of the problems encountered in diving. This deep-sea outfit
was designed for extensive, rugged diving work and provided the diver maximum physical protection and some maneuverability.

The 1915 MK V Diving Helmet had an elbow inlet
with a safety valve that allowed air to enter the helmet, but not to escape back up the umbilical if the air supply were interrupted.
Air was expelled from the helmet through an exhaust valve on the right side, below the port. The exhaust valve was vented
toward the rear of the helmet to prevent escaping bubbles from interfering with the diver’s field of vision.
By 1916, several improvements had been made
to the helmet, including a rudimentary communications system via a telephone cable and a regulating valve operated by an interior
push button. The regulating valve allowed some control of the atmospheric pressure. A supplementary relief valve, known as
the spitcock, was added to the left side of the helmet. A safety catch was also incorporated to keep the helmet attached to
the breast plate. The exhaust valve and the communications system were improved by 1927, and the weight of the helmet was
decreased to be more comfortable for the diver.
After 1927, the MK V changed very little. It
remained basically the same helmet used in salvage operations of the USS S-51 and USS S-4 in the mid-1920’s. With its associated
deep-sea dress and umbilical, the MK V was used for all submarine rescue and salvage work undertaken in peacetime and practically
all salvage work undertaken during World War II. The MK V Diving Helmet was the standard U.S. Navy diving equipment until
succeeded by the MK 12 Surface-Supplied Diving In February 1980
which in turn was replaced by the MK 21 in December 1993.