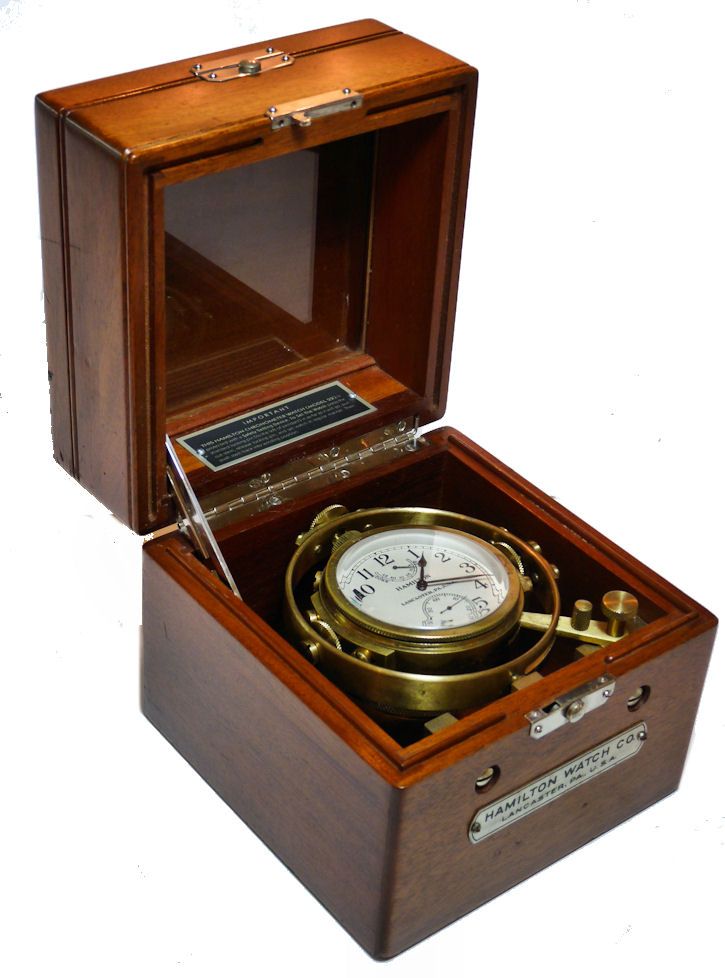 Presented is a WW II HAMILTON Model 22 Chronometer
watch that actually served in a Navy ship during WW II. That is certain due to the stamping on the bottom of the brass cap on
the tub’s underside. It reads:

NO
stands for the Naval Observatory. 3404 is the Navy’s number which appears on the side of the case and on the bottom of
the cap so those numbers match.

The
numerous clocks that were declared surplus at the end of WW II were quickly purchased by collectors and jewelry
stores so none with a Navy mark remained. Sensing a continuing demand, Hamilton reissued this model clock without the
military stamping on the bottom of the case, but used movements that they had left over from the War. Jewelry stores had these
clocks in their windows so passers by could check the time. It is mostly these versions that you now find in the market
with clock collectors trading the Navy versions among themselves..

CONDITION:
The 12 hour dial is without a blemish and looks as new. It reads HAMILTON LANCASTER, PA., U.S.A., 48 hour Up/Down Indicator
at top, Seconds Bit Under. The number 3404 is engraved on the bezel and on the body of the housing under Hamilton, and
in the outside of the back cover. Inside, the movement is engraved the Model 22 specifications and U.S. Navy Bureau of
Ships 1942. To the right of the balance wheel is 2F11236 which is the movements serial number. The clock is keeping excellent
time when compared to a quartz wrist watch set to Atomic time.

The clock is housed in its traditional three section varnished wood case with full gimbal
mounts. It is in fine condition with some minor scratches.The most prominent is on the right front side of the case down
from the edge as in the last picture below. Most of the original lacquer is worn with the brass having a nice patina
of age. 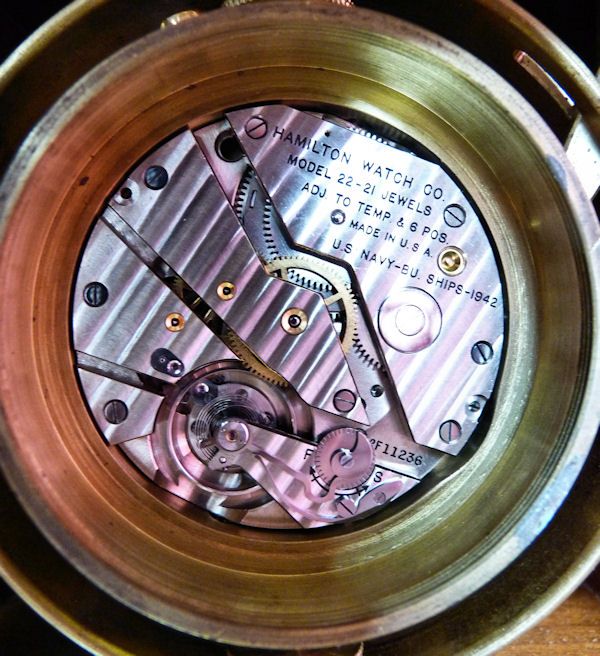 SPECIFICATIONS: The Hamilton Model 22 is a legendary watch, hurriedly designed when the
USA was entering WWII, along with the far more complicated Model 21 marine chronometer; both are considered amongst the finest
of their type. The 22 was even produced in the boxed-and-gimbaled format, as it was proven to be reliable enough
to serve as a ship’s primary timekeeper! The case is 70mm across, of plated and matted brass, and features a wonderful guarded
crown and button to prevent inadvertent setting. Although the mainspring’s power reserve is some 60 hours, and the dial indicates
up to 48, it was intended that the watch would be wound each day at the same time for nearly perfect isochronisms. The enormous
movement is fully adjusted and immaculately finished and striped. The elegant regulator uses a spring-loaded finger which
traces the perimeter of a snail-cam.

HAMILTON CHRONOMETER HISTORY: Hamilton
Model 21 Marine Chronometers and Model 22 Deck Watches.   At the outbreak of W.W. II, the
United States Navy required a vast quantity high quality chronometers. At that time, the Navy had been using Ulysses
Nardin timepieces as standard equipment with few if any being available in this country.  A request for bids was made
by the War Office, and the Hamilton Watch Company was the only firm able to meet the requirements by designing and
producing an innovative marine chronometer in  a period of about 18 months.  Hamilton was able to produce the unit
in sufficient numbers to meet U.S. wartime demand, and made 11,239 of these chronometers during the War.

The model 21 and 22 are technically one of the great achievements in horology.
The balance and hairspring assembly were a radical departure from traditional chronometer design and resulted in superior
time keeping rates.  In addition, Hamilton also produced a 21 jewel lever escapement chronometer deck watch. A more detailed
description of both the model 21 and 22 timepieces can be found in Marvin E. Whitney’s book: “Military Timepieces” which
is recommended reading for serious collectors.


This fine example is a worthy addition to any timepiece collection.