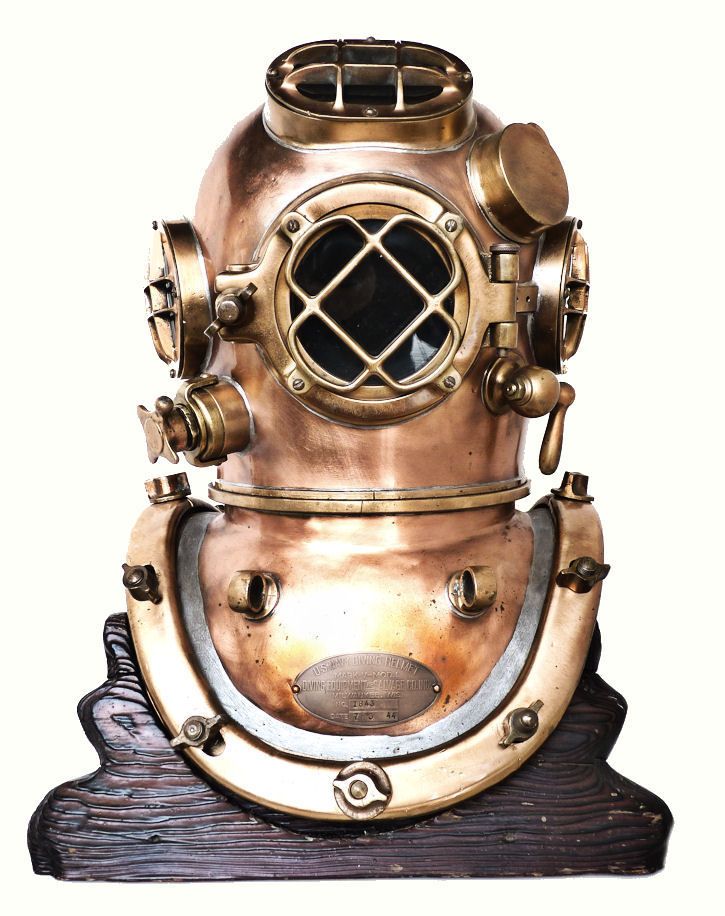 Copyright
2013 by Land And Sea Collection, All Rights Reserved.

Presented
is a classic Diving Equipment & Salvage Company Navy MK V dive helmet in excellent condition that was made in 1944. It is an authentic 12 bolt, 4 light DESCO helmet with matching numbers on the tag, inside
the neck ring of both the helmet and breast plate. The helmet is in exceptional original condition with mainly some dents
only at the top right back. The rare, muted rose colored, copper has been polished and lacquered to make it an exceptional
display which will add a dramatic touch to any setting.

Sold as a display item only, and should not be used
for any other

purpose
unless certified
by a competent diving shop.

PROVENANCE: This helmet was formerly owned by a professional
diver and collector of helmets, diving gear and equipment who acquired it about twenty five years ago. Nothing else is known
other than it originally saw service in the Philadelphia Navy Yard.
CONDITION and MARKINGS: This helmet is in exceptional original condition, and may be considered collector quality.
Its exterior has been cleaned by blasting with walnut shells and only has a few dents at the top right back. There are also
some minor scuff marks and scrapings, but nothing that is objectionable. All the air passages inside are intact, and all the movable parts work freely.

The oval shaped brass name plate has serial number 1843 and 7-3-44
stamped on. Contrary to some belief the MK V came from the different manufacturers with three different shaped tags. They
were the rectangular tag made in both brass and lead
and the oval shaped made in brass. The chest plate weighs 30 pounds, the helmet 31.5 pounds, for a total of 61.5 pounds.

HISTORY OF DESCO DIVING: DESCO was first organized
in 1937 in Wisconsin
under the name Diving Equipment and Salvage Co.Its founders included
a professional deep water diver, a Hollywood producer specializing in underwater photography and a medical doctor who was
a research scientist at. This team successfully worked together in developing
a deep water diving suit combined with a helium oxygen breathing mixture which resulted in Desco divers setting two successive
deep water records of 420 and 550 feet.

World War II brought large Navy contracts for diving equipment
to DESCO. They included not only conventional hard-hat gear for
the navy, but also the design, development and manufacture of an oxygen re-breather, known as the “B Lung. By V-J Day, DESCO
was producing more diving equipment than any other company in the world.

In 1946 the company as sold to another group ofbusinessmen and changed its name to Diving
Equipment and Supply Co., Inc. After the Korean War, which again brought an increase in U.S. Navy contracts and orders, the
ownership changed hands several times and has since concentrated on the design and manufacture of commercial and U.S. Navy
diving equipment.

Morse was the first company to make the Navy MK V helmet,
starting production in 1916. During the onslaught of World War Two Morse and then Schrader were making dive helmets for the
Navy. Desco and Miller-Dunn went into production around 1942 or 1943. In total only about 7,000 MK V helmets were produced
by all four companies during the war years.

In
1968, DESCO moved to its present address at

By 1915, the Bureau of Construction and Repair
had designed the MK V Diving Helmet which seemed to address many of the problems encountered in diving. This deep-sea outfit
was designed for extensive, rugged diving work and provided the diver maximum physical protection and some maneuverability.
The 1915 MK V Diving Helmet had an elbow inlet
with a safety valve that allowed air to enter the helmet, but not to escape back up the umbilical if the air supply were interrupted.
Air was expelled from the helmet through an exhaust valve on the right side, below the port. The exhaust valve was vented
toward the rear of the helmet to prevent escaping bubbles from interfering with the diver’s field of vision.

By 1916, several improvements had been made
to the helmet, including a rudimentary communications system via a telephone cable and a regulating valve operated by an interior
push button. The regulating valve allowed some control of the atmospheric pressure. A supplementary relief valve, known as
the spit cock, was added to the left side of the helmet. A safety catch was also incorporated to keep the helmet attached
to the breast plate. The exhaust valve and the communications system were improved by 1927, and the weight of the helmet was
decreased to be more comfortable for the diver.
After 1927, the MK V changed very little.
It remained basically the same helmet used in salvage operations of the USS S-51 and USS S-4 in the mid-1920’s. With its associated
deep-sea dress and umbilical, the MK V was used for all submarine rescue and salvage work undertaken in peacetime and practically
all salvage work undertaken during World War II. The MK V Diving Helmet was the standard U.S. Navy diving equipment until
succeeded by the MK 12 Surface-Supplied Diving In February 1980
which in turn was replaced by the MK 21 in December 1993. 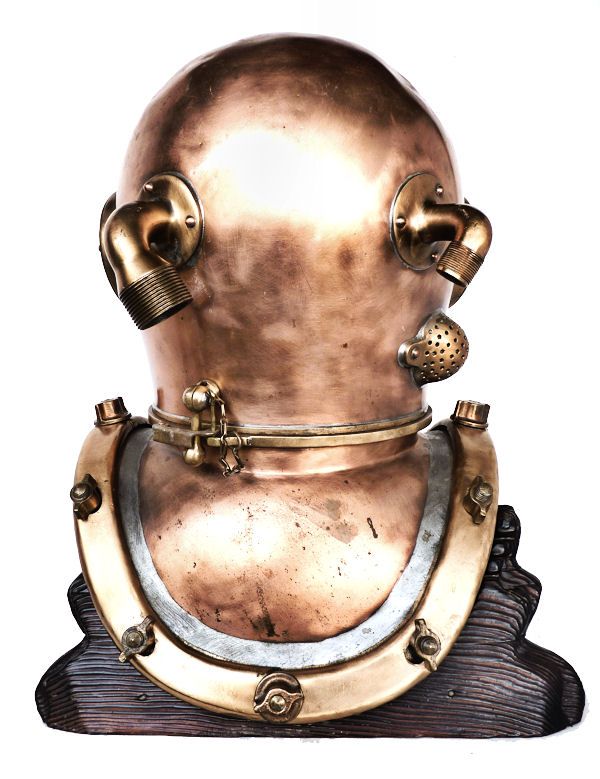 SHIPPING & PACKING: The cost of shipping, packing,
handling, and insurance to your destination, must be calculated and is an additional charge. You may email us beforehand to
get these costs. We price our shipping honestly, but we expect to be reimbursed for the nominal cost of packaging materials
and handling.