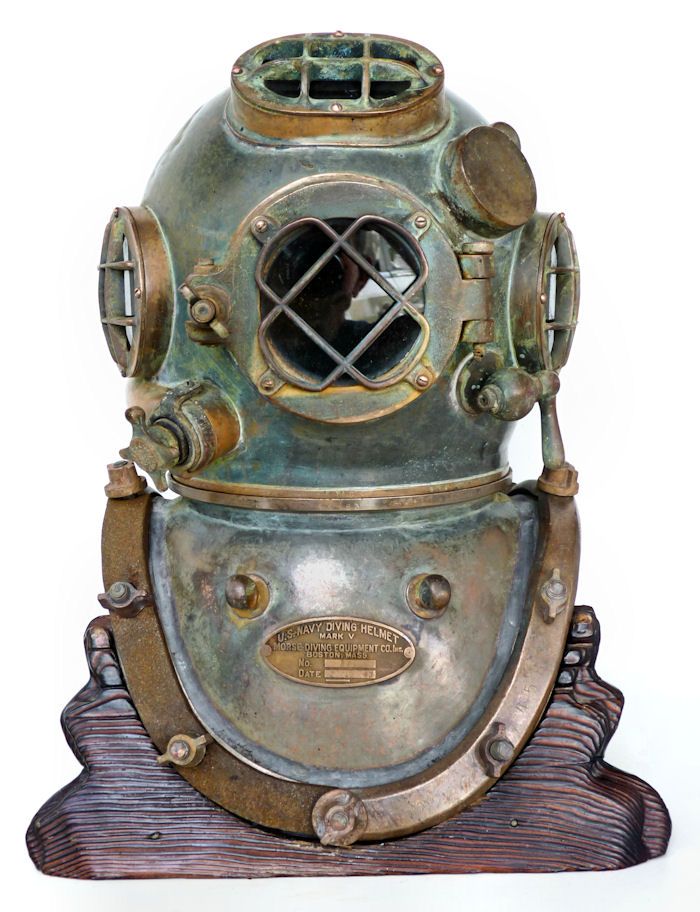 Copyright
2013
by Land And Sea Collection, All Rights
Reserved.

Presented
is
a nearly all original 1943 Morse MK V, 4 light, 12 bolt, dive helmet, which has
acquired a very attractive silver blue patina with light green overtones over
the years.  It is one of the best looking dive helmets we’ve seen and makes a
dramatic appearance.
It will act as a great focal point in any decor. Morse was one of the original
Navy suppliers of the MK V Diving System, but their helmets were made in fewer
numbers than MK V helmets from DESCO and Schrader which are much more prevalent
on the market. This makes it ideal for a serious collector or someone interested
in its smashing good looks. The stand is not included.
Morse records show that Tag number 870 was made in
1943, and shipped to the Brooklyn Navy Yard. The matching build numbers, 4583
appear on the two neck rings, as well as on three of the four brails. The right
front brail is iron. It was obviously precision made in a foundry or metal
working shop since it fits the shape and curves of the breast plate perfectly.
We had planned on having a replacement made, but Morse’s foundry is closed for
vacation until mid-August. If someone, thinks this would improve this helmet, we
will order one, but keep in mind that this is part of the helmet’s history. It
is unfortunate, that we don’t know the story behind this anomaly.
There is no USN special anchor inspector’s marks on
this helmet. Morse recently told us that the Navy inspectors did not stamp all
the helmets in a production order, they used a statistical sampling technique,
and when the whole production lot was inspected only a few were stamped.
PROVENANCE: The
helmet comes from a famous, massive and eclectic collection of nautical antiques
that included fine examples of rare antique navigation instruments, a collection
of French Prisoner of War models, numerous scrimshaw, log books, charts, and
marine relics. They were acquired by a professor of oceanography, with a love of
all things nautical, over many years, and were last located in Hawaii which was
his residence at the time he passed. This helmet is estimated to have been in
the collection for at least the last 30 years.

CONDITION: All the
glass and brails except one are original. All the wing nuts except one are
original. Both the bonnet and the breast plate are a matched pair. There are a
few dents and dimples, mostly on the top and back, all of which are minor and
should be expected. There are some marks acquired in moving the helmet from one
place to another over years. A great deal of the original tinning remains and
has turned dark pewter with age. The helmet’s  silver, blue with light green
overtones are strikingly beautiful. All the vents are intact and original. There
is no speaker. The gate that holds the dumb bell lock is a replacement as is the
chain and cotter pin. It is in excellent condition overall. All moving parts
operate. All
the air passages inside are intact. The helmet weighs
55 pounds.

It
is being offered as a display
item only, and should not be used for any other purpose unless certified by a
competent diving shop.

HISTORY OF MORSE DIVING: In the arena of deep sea
diving, there are few companies with the longevity and history of Morse Diving.
The company was founded in 1837 as a Boston maker of brass ware, three years
before Englishman Augustus Siebe manufactured its first closed air dive helmet.
During the Civil War, the firm commenced building maritime fittings and began
experimenting with early underwater hardhat designs from Siebe-Gorman and other
pioneering makers. In 1864, Andrew Morse bought out his partner, introduced his
sons into the business, and began to focus on creating new products for
underwater salvage expeditions. In 1904, that firm became A. J. Morse and Sons,
Inc., under which name it continued until 1940. Then the name Morse was
re-incorporated as Morse Diving Equipment Company, Inc. Finally in 1998, the
company changed owners, and became Morse Diving Inc.

As their
expertise and experience
grew over the years, they developed a worldwide reputation as a major supplier
of hardhat diving apparatus. Morse was the first company to make the Navy MK V
helmet, starting production in 1916. During the onslaught of World War Two only
Morse and then Schrader were making dive helmets for the Navy. Desco and
Miller-Dunn went into production around 1942 or 1943. In total only about 7,000
MK V helmets were produced by all four companies during the war
years.

BRIEF
HISTORY of
NAVY MK V DEEP SEA DIVING DRESS:
By
1915, the Bureau of Construction and Repair had designed the MK V Diving Helmet
which seemed to address many of the problems encountered in diving. This
deep-sea outfit was designed for extensive, rugged diving work and provided the
diver maximum physical protection and some maneuverability.
The 1915 MK V Diving Helmet had an elbow
inlet with a
safety valve that allowed air to enter the helmet, but not to escape back up the
umbilical if the air supply were interrupted. Air was expelled from the helmet
through an exhaust valve on the right side, below the port. The exhaust valve
was vented toward the rear of the helmet to prevent escaping bubbles from
interfering with the diver’s field of vision.
By
1916, several improvements had been made to the helmet, including a rudimentary
communications system via a telephone cable and a regulating valve operated by
an interior push button. The regulating valve allowed some control of the
atmospheric pressure. A supplementary relief valve, known as the spit cock, was
added to the left side of the helmet. A safety catch was also incorporated to
keep the helmet attached to the breast plate. The exhaust valve and the
communications system were improved by 1927, and the weight of the helmet was
decreased to be more comfortable for the diver.
After 1927, the MK V changed very little.
It remained
basically the same helmet used in salvage operations of the USS S-51 and USS S-4
in the mid-1920’s. With its associated deep-sea dress and umbilical, the MK V
was used for all submarine rescue and salvage work undertaken in peacetime and
practically all salvage work undertaken during World War II. The MK V Diving
Helmet was the standard U.S. Navy diving equipment until succeeded by the MK 12
Surface-Supplied Diving In February 1980 which in turn was
replaced by the MK 21 in
December 1993. 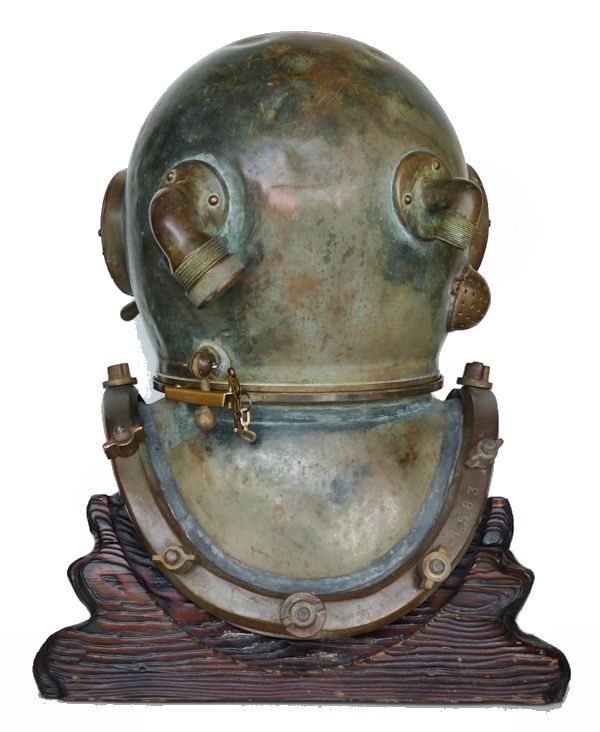