Presented is a very early Chinese made Bosun’s “Pipe” or
“Call” which is frequently referred to as a Boatswain’s whistle by landlubbers. This
one is much larger than what is used today by the Navies
of the worlds’ noncommissioned petty officers, usually the Boatswain’s Mate of the Watch. It is
usually embellished by having an artfully worked dragon on both
sides of the flat section which is called the “Keel”**.
It is unmarked, but is most assuredly made of
the Chinese equivalent of Silver which is itself a highly prized collectible in today’s
market. Two have been known to have been made
with the dragon positioned on the top. One was sold by us this year and
the other by Christie’s in 2008. See http://landandseacollection.com/id847.html
SIZE:  Size  5 7/8″ x
13/16″ W at the bowl     Depth at the keel
15/16″    Weight 31 grams
First Sale’s Size 5 1/4″ L x 7/8″ W, at the bowl  Depth
at the keel 14/16″
Weight 21 grams 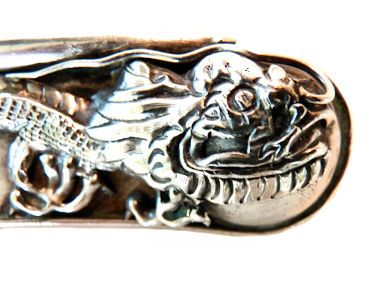 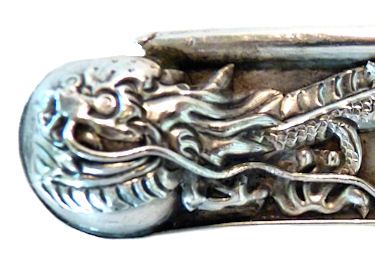 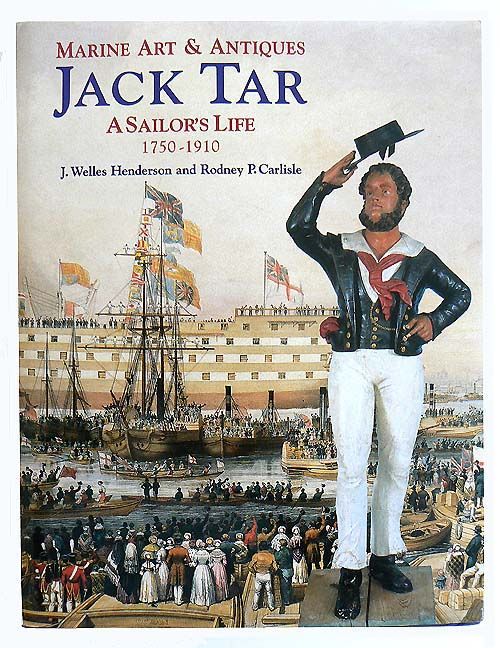 In August, 2008, this up-scale auction house sold the Henderson pipe inLot
550 for $5148.00 which included the buyer’s premium. It was described as “Chinese Export Silver Bosun’s
Whistle, Nineteenth Century: The ball chamber chased and engraved on each side, with dragon’s head applied and streams of flame continuing down each side, the body marked sterling. Length 55/8”. Literature: Jack Tar, p. 48″  Our first sale, which was similar to that whichwe now offer,  took place to a British Antique Consultancy for a client museum in 2011.NORTHEAST AUCTION 2008 SALE:
COMPARISON; THIS ANTIQUE TO A PIPE STILL BEING USED IN ENGLAND:

The length of this relic, which likely dates back
to the early 1800’s, is 5 7/8″ compared to 4 1/2″ for British one. Its width at the
widest point at the buoy is 13/16″ compared to 5/8″. These are major differences
in size and certainly in appearance as shown in the picture below. 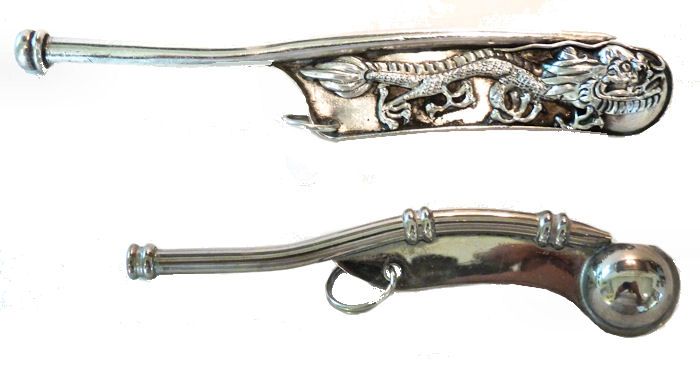 A SUMMARY OF
ANTIQUE
CHINESE SILVER: The topic is beyond the scope of this listing except in
the most general terms. The early days of the export of Chinese silver
dates to Ca 1800 and earlier. In the early period it might
have been  made to order since the ships remained in port for
extensive periods as their holds were filled with return cargo by the
various trading companies that represented them. The trading companies were located
centrally in such ports of entry as Hong Kong, Shanghai and Canton. It
is the early examples that are most in demand. The early Chinese silver
in the 18th, and 19th centuries that were not custom made featured
primarily Chinese designs and were hand hammered, but if the
visitors stay was lengthy, it could be custom made to their
designs.

By the 20th Century, the Chinese adopted mass
production techniques. They had also adopted using hallmarks like the English,
which allows the larger shops to be identified, but totally ignores the
smaller shops that were outside this realm which could be superior.
The silver content was never a measured standard so it varied between makers
and even by the same maker. It is not a consideration in establishing
today’s value. That is based on condition, execution to the style
of the day, and when from a known maker, their current reputation for superior
quality.

Few of the
various China trading companies or shops made bosun’s pipes which
accounts for how scarce they are today. For example, this is only the
third one and the earliest we have found in the last ten
years.

BOATSWAIN’S CALL OR PIPE: From Wikipedia, the free
encyclopedia

boatswain’s call is
a pipe used on naval ships by a boatswain. It is also spelled
“bosun’s call”. It is never called a “whistle” except by landlubbers
(added). The pipe consists of a narrow tube (thegun) which directs air over a metal sphere (the
buoy) with a hole in the top. The player
opens and closes the hand over the hole to change the pitch. The rest of
the pipe consists of a keel, a flat piece of
metal beneath the gun that holds the call together, and the shackle, a keyring that connects a long silver
or brass chain that sits around the collar, when in ceremonial
uniform.

History and usage Historically the boatswain’s call was used to pass
commands to the crew when the voice could not be heard over the sounds
of the sea. Because of its high pitch, it could be heard over the
activities of the crew and bad weather. It is now used in traditional
bugle calls such as Evening Colours Sunset, and in other ceremonies in most modern
navies. It is sometimes accompanied by other auditive features such as
ruffles and flourishes, voice commands and announcements, or even a gun
salute.

Haul: The
most basic of calls. Crews of warships were not allowed to sing work
songs or shanties, so the pipe coordinated the sailors. The low note
was for the pause and preparatory; the high for pulling on the line.
The Side
or Away Galley: Descends from the tradition
of hoisting officers aboard ship in a chair. It is a combination of haul, and then a command to lower. This call
remains in use as an honor given to officers when embarking or
disembarking.

Away
Boats: Used to order a ship’s boats to leave the ship’s side.
Call the
Boatswain’s Mates: The boatswain’s gang to report. All Hands on
Deck: Crews were split into two rotating watches that stood for
four hours at a time. This call signals the entire crew to assemble on
deck. Word to be
Passed: Command for silence, an order to follow. Pipe
Down: Dismissal of all the crew not on watch. Dinner or
Supper: Calls the crew to a meal. Still:
Used to call the crew to attention. Carry On
Used after the still, to dismiss the crew
back to their duties. General
Call Piped before an announcement.<