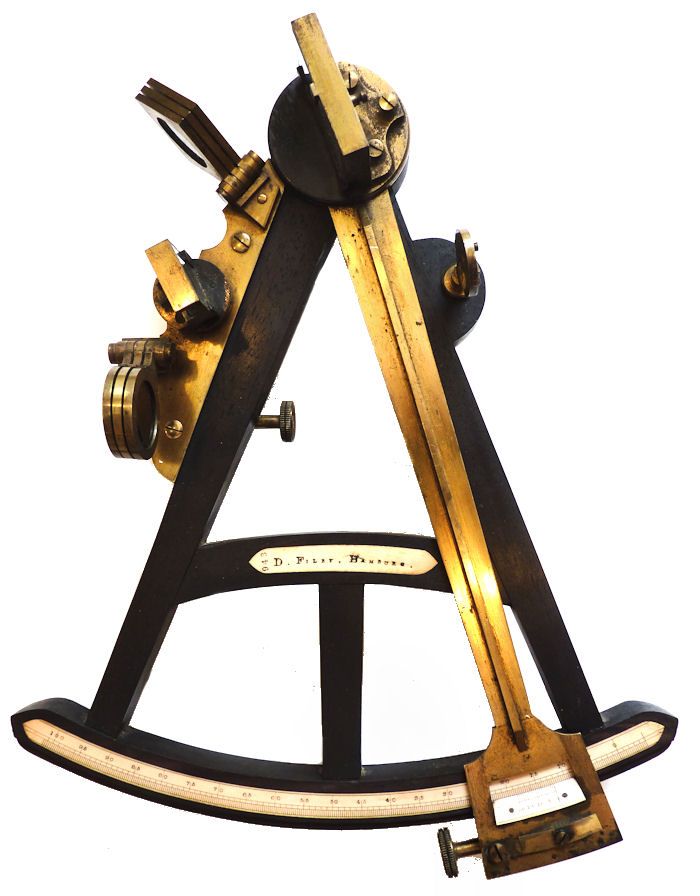 Presented is a very rare mid 19th C German mariner’s sextant with ebony frame, ivory graduated arc and vernier, and bronze fittings. This instrumentis so rare that most students of navigation don’t know o its significance or have only read aboutit or seen pictures in a book. The D. Filby name is inscribed on the ivory plate set in the curving cross bar along with
the number 943 that is set on end. This is only the second Filby instrument we have come across. The first was a near twin in 2005, but
it was without its case. This one would make a worthwhile contribution to a museum for someone so inclined, or as an important gift, or certainly it will be at home in a collection of rare instruments. This carefully executed machining of its brass workings sets it apart from others of the same period.
The instrument has a ribbed brass index arm measuring 11 inches. The arc is graduated from – 5 to plus 100 degrees. The horizon
mirror is on an adjustable turntable and can be rotated by loosening a screw which locks the mirror’s position. Other
features include a ivory vernier scale, which reads from right to left from 0 to 20 arc minutes,
a two hole peep sight with “flap”, and three sun shades for the index mirror and two for the horizon
mirror. The number 943 on the arc may be aserial number, but maybe not. The instrument’s style is that of an octant, but it has some advanced features such as the ribbed index arm and tangent screw which, we believe, dates it pretty much in line with the first one
we sold, which was number 1083, and dated as Ca 1840. The Filby sextant business was started in 1837, and it was only twenty five years until they sold out to Carl Plath. All of these  features indicate the instrument to be from the middle of the 19th century, or likely Ca 1840. 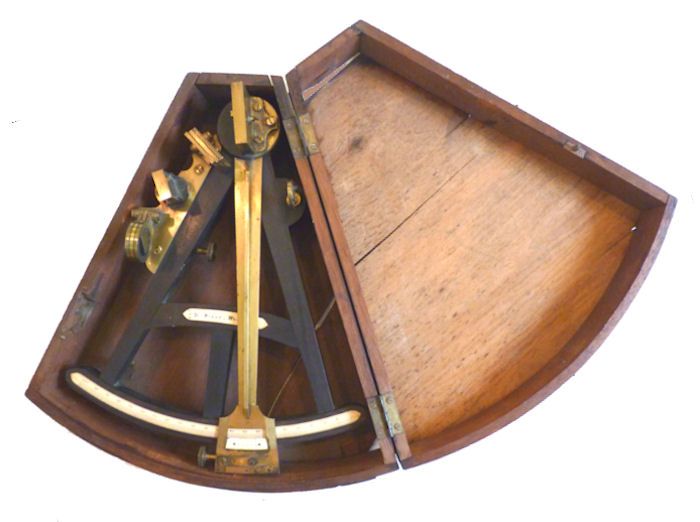 picture on page 25 which is of a  later style single peep sight
which is also threaded for a telescope. It is the
one pictured with the green background below. 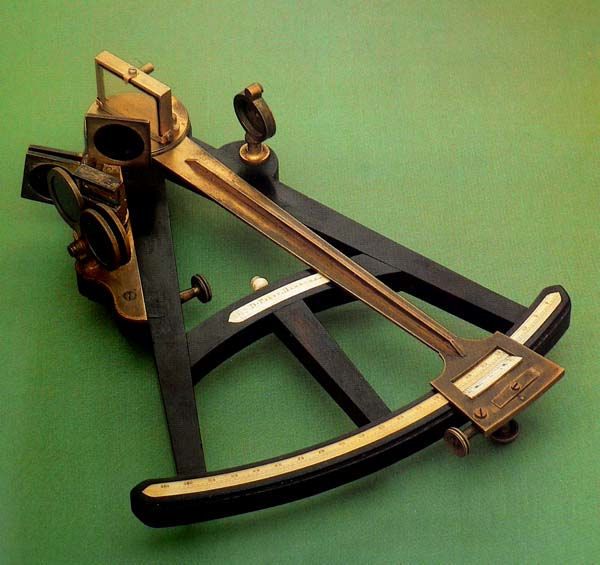 As shown in the C.
Plath book From Sextant
to Satellite Navigation,

Some time after 1780, the addition of a tangent screw as fitted here allowed for fine adjustment and represented one of the two major changes in the basic operation of the octants and sextants for the next 150 years! The second was the fitting of telescopes. As was the practice with octants, only peep sights were fitted. Later a handle was added to sextants. All of these tell tales indicate it is one of the earliest of that type offered by David Filby making it a noteworthy instrument by this maker in more than one respect. 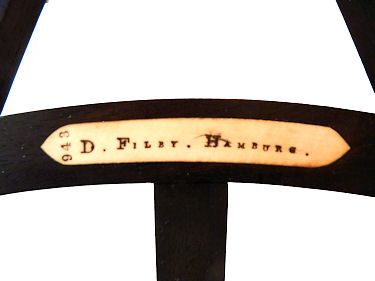 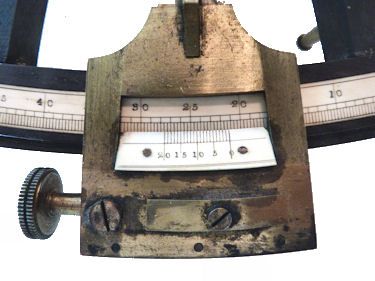 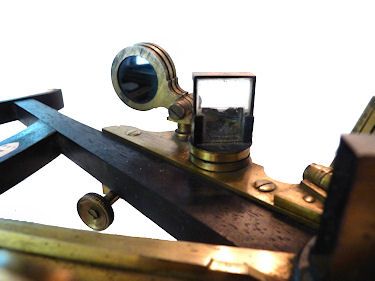 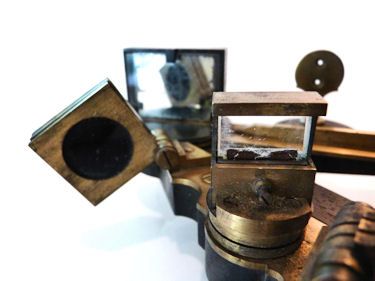 The instrument, its ivory name plate, sharply and
precisely engraved graduated arc, and its hardware are in excellent condition. Most of its original lacquer finish
remains. There is only the slightest evidence of age. All three bronze legs are present. Missing is the small
ivory scribe. The horizon mirror is in very good condition with one small grey area, and the index mirror has a few vertical thin
grey lines, but most of its area is good. The instrument has that gently worn pleasing look that comes with over 170 years of age.
The case has done its job in protecting the instrument and has received some gouging of the wood along a portion of its front top edge. It
also has age cracks top and bottom and a small piece of the corner missing..There was a thin piece of wood missing
along the top back which has been replaced. The case is strong enough to do its job. There are no labels or markings in it. A lock
is present, but the key is missing This is an outstanding example from a historic German instrument maker which
gave rise to the C. Plath sextant. It is in “Fine” condition with about 95% of its original lacquer finish remaining. 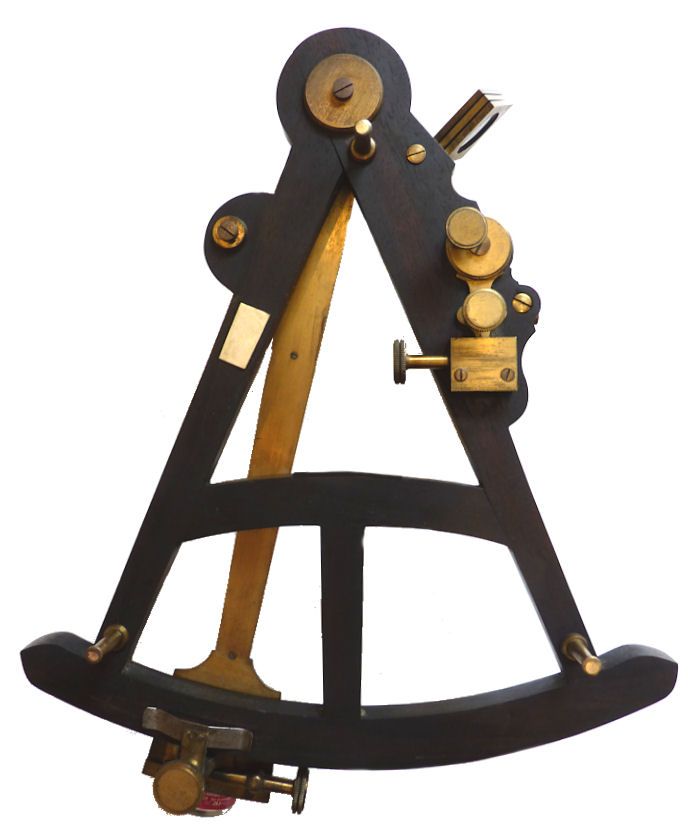 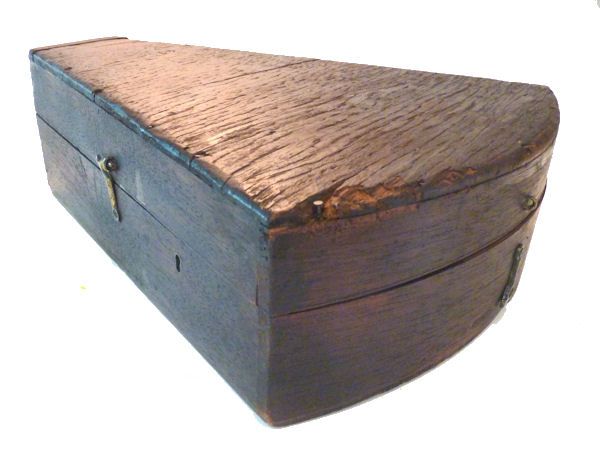 Showing the back hardware and
Machinery
above the
case

HISTORY OF DAVID
FILBY:  Filby was born in 1810 in
Husum, Germany. His father was an innkeeper.  In 1820 the family moved to
Hamburg which was a major seaport with vessels arriving and departing for
Britain, France, Portugal and Spain, and the United States of America as well
as to the Caribbean and South America. Nothing is known about
Filby’s youth.  In 1830, at age 20 he began a four-year
apprenticeship as a “mechanics” in the workshop of Heinrich Johann Kosbu, an
instrument maker for Physics.  Kosbu’s workshop was adjacent to what was
then the inner port in the center of Old Hamburg,  Those who worked
on the Kehrwieder came into daily contact with the ships, the captains,
the mates and the crews from countries all over the world. After completing
his apprenticeship, he continued to work for Kosbus until he set up his own
business in 1837 at age 27.  To legally be in business his firm had
to be registered, and the owner had to be a citizen of Hamburg which was a
separate State. Filby did not achieve citizenship until 1840 having
operated his company illegally for the 3 preceding years. Years later, this
beginning caught up with Filby due to a clerical error in filing the
notice of the sale to Plath. He was brought before the commercial court and
fined 15 marks, a cause of embarrassment since he was by then a delegate to
the city parliament. The Filby shop was on the
Vorsetzen directly on the so called “Rummelhafen” where large numbers of
sailing ships frequently blocked the view over the Elbe.  In his shop he
stocked charts, nautical literature and increasingly nautical instruments,
which he first imported from Britain, the country then known
worldwide as producers of the best instruments. As was the practice, Filby had the
first instruments he sold, marked with the name of his firm, D. Filby,
Hamburg”.  He soon set up a repair workshop for nautical
instruments,  which grew in the course of the of the next few years into
an independent factory for the production of nautical instruments
comprised mainly of sextants. For the next 25 years the firm devoted itself to
serving the needs of seafarer’s by providing nautical instruments of the
highest quality, and their sextants were known through out the maritime
industry as some of the best. These efforts quickly brought him
success and public recognition.  For reasons not known, he sold  his
business to Carl Plath in 1862, when he was just 52 years old. When Plath
acquired the Filby firm he chose to name his new company, “C.
Plath, D. Filby’s Successor”, indicating the high esteem he had of
Filby’s business and his intention to maintain Filby’s tradition of
importing, making and selling navigational instruments.After the sale, Filby devoted
himself to numerous honorary offices until his death. In 1882, three years
after Filby’s death, Carl Plath sold the nautical literature and charts
department of the business to the newly established firm of Eckardt &
Messtorff, a bookshop which is said to exist today keeping the nautical
instrument business as the foundation of his own.The Filby Foundation for the relief
of poor and needy seaman and seamen’s widows in Hamburg” and “The Filby
Foundation Prize for the Hamburg School of Navigation were established in 1894
and operated until 1923.C. Plath ceased sextant
production in 2002 after 137 years.