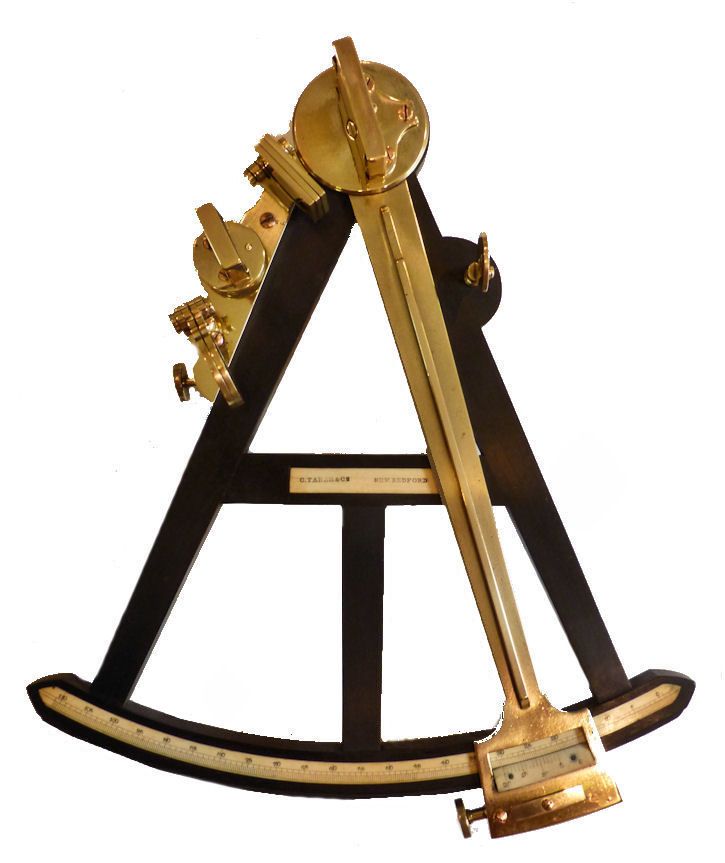 Presented
is an ebony frame, ivory arc, antique sextant made by
Charles Taber & Co. New Bedford.  There were few
American makers of navigation instruments, most of which
were imported from England. The Taber company was located in the
heart of the whaling industry. There is a lot of New England
history associated with this instrument. BRIEF HISTORY OF CHARLES TABER: Born
near
New Bedford, MA on April 3,
1824, of Mayflower stock, and died in New Bedford in 1887. Taber shipped
out on a whaler at 15. After many years at sea, he
became master of his own vessel. When gold was discovered in California,
Captain Taber sailed around Cape Horn in August 1848.
For a time, he was engaged in the transportation of troops for the
U.S. government. Taber was later the captain of a ferry
boat which plied the waters between San Francisco and Sacramento. He returned to
New Bedford and continued a career ashore in the
instrument business with his brother William, starting in 1849, as
a maker of navigation instruments and the firm also became a
printer. The Taber firm was active until the 1880’s and went into the art
business.
There is a label of Charles R. Sherman, a
nautical instrument dealer on the inside cover over stamped in red with
C.R. Sherman & Son.
The elder Sherman, at one
time was associated with William C. Taber, Charles’ father, in
the nautical book business.The label reads: Charles R. Sherman Nautical, Mathematical and Optical Instruments, Charts, Nautical Books,
Patent logs, Stationery, &c.,
No. 49 North Water Street, New
Bedford. 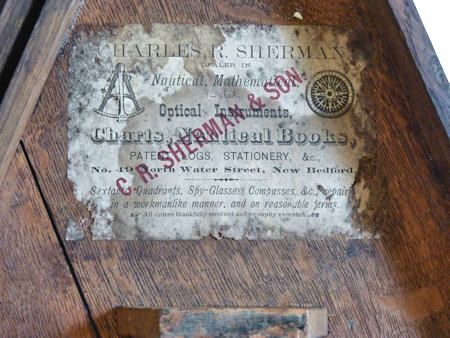 < Charles
Taber was in
business in New
Bedford from in the mid 19th Century. He is briefly listed in Webster’s Registry of
Instrument Makers’ Signatures, but Taber had much more extensive operations than Webster’s has
a
record of. THE
SEXTANT: This beautifully made instrument
has a ribbed brass index armand measures 12 inches
long on the index arm. The arc measures from – 5 to plus
110 degrees. The ivory plate on a cross bar between the two
limbs is engraved “C. TABER & CO. NEW BEDFORD”. The horizon
mirror is on an adjustable turntable and can be rotated. Of
special significance is the rib down the index arm,
the tangent screw, ivory vernier scale, reading from right to
left from 0 to 20 arc minutes, a peep sight,
and two sets of sun shades all of which help date the instrument.
There is no provision for a handle on this sextant. All these
features indicate it is a transitional piece between an octant
and a sextant which we date as having been made around
1860. FEATURES CONSIDEREDSome time after
1780, the addition of a
tangent screw, as fitted to this instrument, allowed for fine adjustment
and represents one of the two major changes in the basic
operation of the octants and sextants for the next 150
years! The second was the fitting of a second set of shades
and a ribbed index arm. And after wards, telescopes and handles were added. 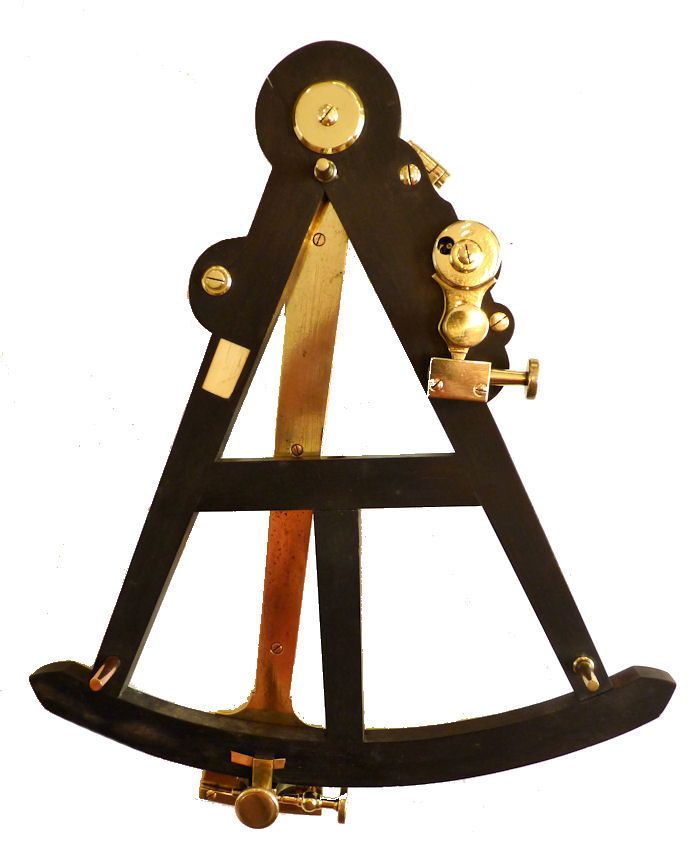 The sextant has been recently polished and
lacquered and is in exceptional condition. The mirrors are
in very good condition considering their age and use.
The ivory scale is in perfect condition. The engraving is
sharp and distinct. Present is a small ivory note pad on the
back, but the ivory pencil cap is missing. The shades are
complete and in good working order. The ebony frame shows
as near new. All the original machinery is
present, including a two hole peep
sight. 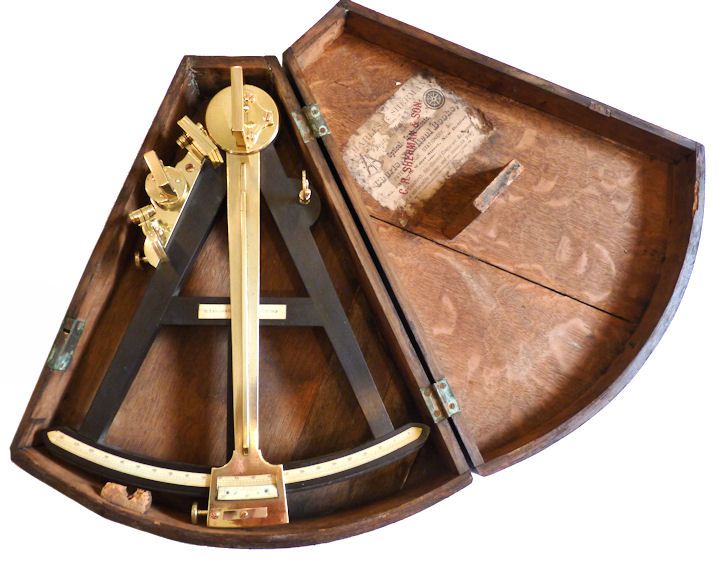 THE
CASE:
The “keystone” solid Oak case shows considerable use
and has a section of wood recently replaced on its bottom.
It has an age crack on the top, the grain
of which has a mottled appearance. There is a lock, but no
key. There  is label inside from Charles R.
Sherman & Son, New Bedford, an instrument and
charts and nautical book
dealer. 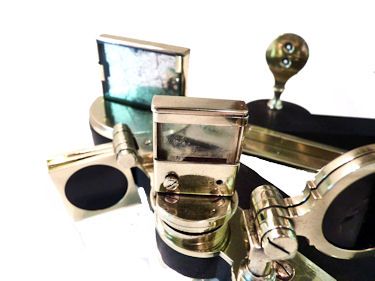 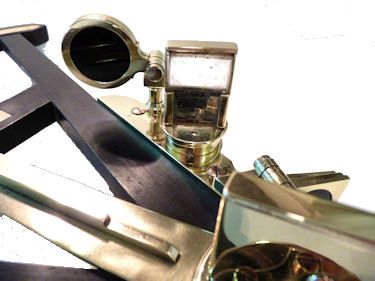 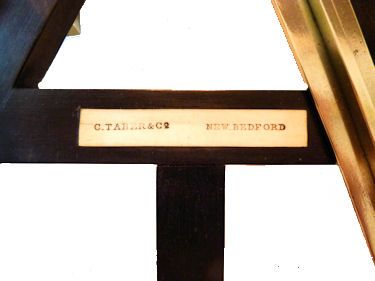 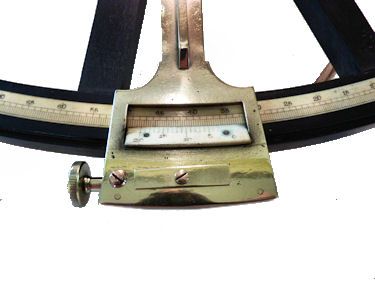 style vernier reading from the

QUALIFICATIONS: We are one of the
few company’s still selling navigation instruments that know
anything about them. For purposes of judging whether Joel’s
opinion counts, he was the editor of the chapter on
sextants of the 1977 Edition of “Bowditch”, The American
Practical Navigator, NAVPUB 9; a member of the U.S. Naval
Academy Navigation Symposium, 1975 -1978; the author of a book
on marine sextants, Cornell Maritime Press,1975, and the founding
president of Nautech Maritime Corporation which partnered
with Tamaya of Japan in the introduction of the MS 733 Spica, the
MS 833, Jupiter, MS 933 Venus sextants and the famous NC-2 navigation
computer, in the U.S. market. Joel is a retired
Master Upon Oceans, and held a U.S. Navy “D” Qualification
as a Senior Skipper – Oceans.From 1995 to
2001, he was a Varsity Offshore Coach at the U.S. Naval
Academy.Rarely do you find
an instrument  with
this pedigree in an outstanding condition. This
is an exemplary presentation piece or gift,
and is meant for someone
who appreciates its rarity and historic value.