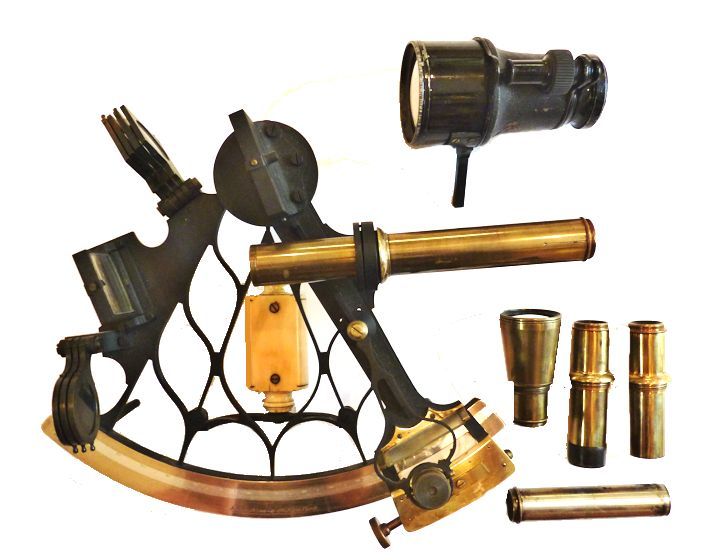 Copyright 2013 by Land And Sea Collection, All
Rights
Reserved

PRESENTED is a instrument that is beyond museum quality which makes it so
rare and special that it can be considered a remarkable relic of the
1870’s. This is only the second time we
have had the pleasure of offering for sale an instrument that exceeds the
highest British Class A specifications. It is a brass frame quintant
with an arc that subtends 144 degrees, in near new condition and
with its Midnight matt black original finish in perfect
condition 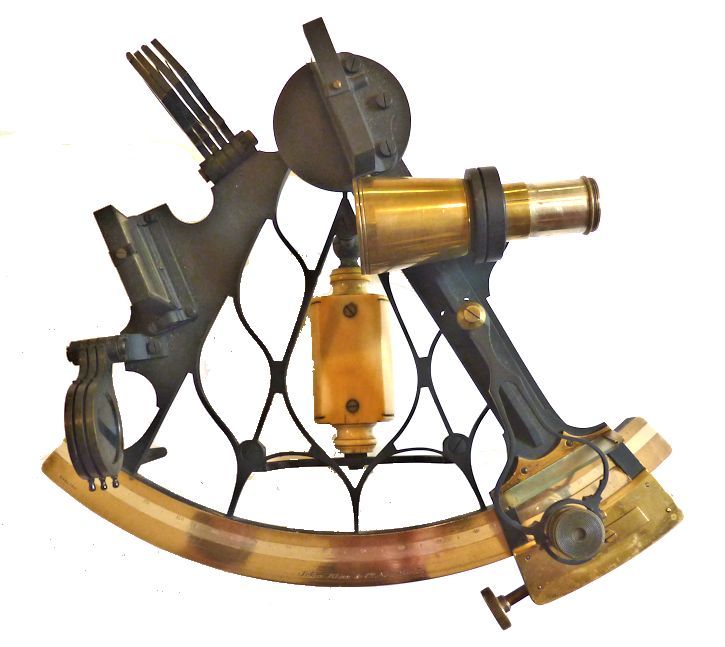 Advanced design features include
a very large horizon mirror and an equally large Index mirror which
gather more light, and hence improve the taking of twilight sights when
using either an extra large wide angle star scope and a smaller star
scope. In addition, there is a higher powered sun scope, a collimation
scope and two sighting tubes for terrestrial objects, making six in all.
The frame’s intricate webbing
is in the form of candle flames which is unique
to this maker’s approach in making a strong and rigid frame.
The handle is carved from a solid block of elephant Ivory, again something unique
to Chadbrurn & Son.  Engraved in Victorian style script on the platinum arc at
70 ° is,
“John Bliss & Co., New York”, and to the far left in
Copper Plate Gothic, “English”. There is no serial number which is
common for this maker.
The
instrument and its accessories are housed in a high quality Mahogany
box with a hand rubbed finish and patina of age. It has a recessed
brass, campaign style handle, two hooks and surprisingly, the original key. The
interior of the case, which has wood holders
for
all the accessories, is finished in high gloss varnish and is also in
“Like New” condition. There is a small Negus label on the inside.
A small screwdriver is missing, but a round, turned brass adjuster for the mirrors is
present. 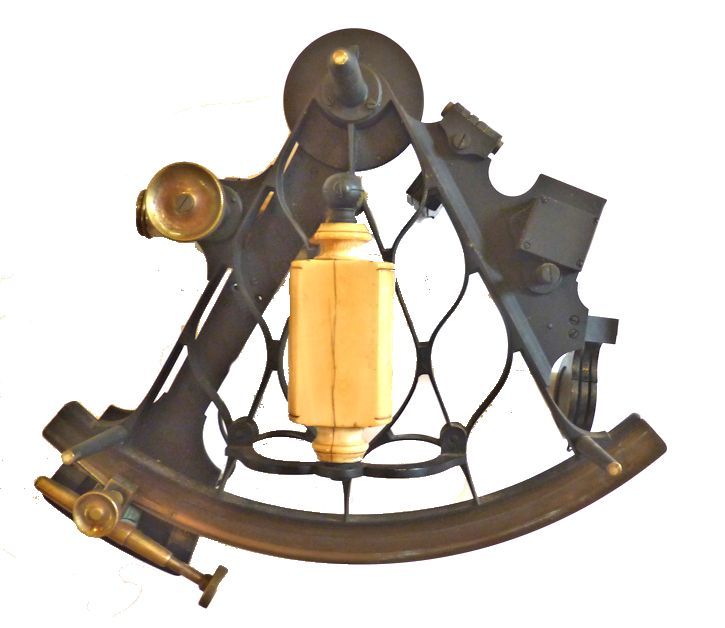 CHADBURN & SON, THE MAKER: This is the second and more
extensively equipped quintant that we have found from Chadburn &
Son. The first was an equally impressive instrument. See

Our research has determined
they were located in Liverpool, England and made measuring devices and
optical instruments. In 1898, they were acquired by the prestigious Chadburns (Ships) Telegraph
Company, which was also headquartered in Liverpool. Until  the acquisition, these two
companies were unrelated, and only by chance shared the same
name.

We were
able to identify a common three circle frame sextant by Chadburn that
was obviously made after they had been taken over by the Telegraph
company, and dates to the 1st Quarter of the 20th
Century.

JOHN BLISS &
Co.: John Bliss (Sr.) (1975 -1857)
John Bliss originally worked as a jeweler in New York in 1835.
Later that year he went into business with English watchmaker Frederick
Creighton, as Bliss & Creighton (from Bliss & Co. Almanacs).
They set up initially as jewelers & silversmiths at 42 Fulton St.,
in lower Manhattan, near the South Street docks, where they remained
in this general area for their entire existence. Bliss & Creighton
over the years acquired the know how and equipment to make high quality
marine chronometers for which they were noted. The partners had a falling
out in1853 which ended in law suits that lasted beyond their life times.
John Bliss then took his oldest son, John Jr., into partnership,
establishing the firm of John Bliss & Son at 40 Fulton St., which
evolved into Bliss & Co when Senior died in 1857.

John Bliss & Co. began producing a number of nautical instruments
themselves, namely compasses, binnacles, logs, azimuth (bearing)
instruments, and transit instruments. In addition they sold sextants
made in England and later Germany with their name on them, as well as
other nautical items such as rules, binoculars, barometers, and Chelsea
clocks that were made by others but with John Bliss & Co. on
them. The company also continued their own
made chronometer business. James Blunt and the Negus brothers were
also noted American instrument makers during this period and in 1873,
Bliss acquired the prestigious Blunt operations. They were at
various locations in lower Manhattan and ended up at 84 Pearl St. from
1929
to 1956, when that building was sold and they were
forced to go out of business.

It is hard to adequately describe
a 143 year old  antique instrument which has survived in perfect condition
other than to say  the elephant ivory handle has a pleasing
warm patina and an age crack, and that a small
screw driver is missing. There is a small black accessory magnifier which
is broken.
The

index and the horizon mirror are in good
condition. The index arm clamp, and swing arm magnifier are complete
and in good working order. Both sets of shades, i.e., filters
are without
imperfections. 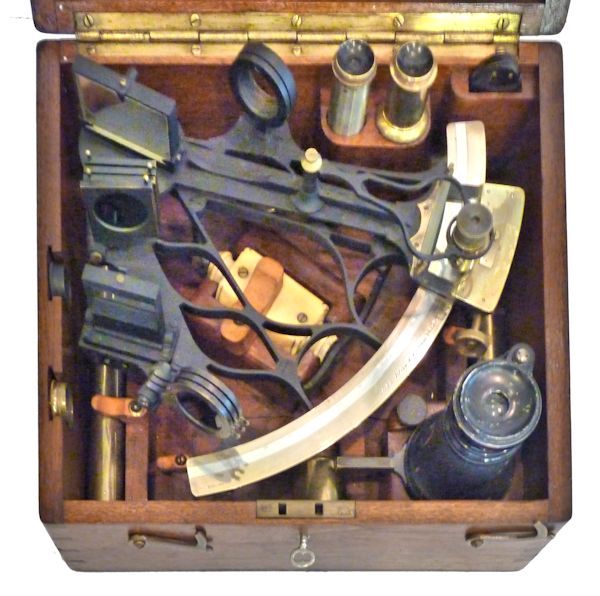 The square case has an unadorned
scalloped brass plate which are frequently lost, and shows the expected
scratches, and handling marks of age across the top. Elsewhere, it has numerous nicks and
scrapes from years of use at sea. It is fitted with the desirable campaign type brass
hardware with a recessed handle. The instrument’s Ivory handle is housed in a
tight fitting chock, and it’s accessories are housed in the customary wood
holders. The two end cap filters for the telescopes are mounted in the holders on left.
A holder at the back house a small magnifier which is present. There are
two latches and a lock, and the original key is present. The
varnish has a wonderful old patina that only comes with natural aging. 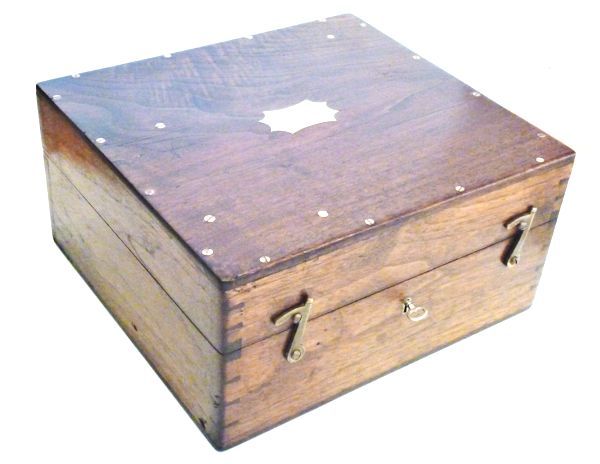 The instrument is complete
with:

The polished
platinum scale is calibrated -5 to +150° with a vernier scale reading
from the right from 0 to 10 arc seconds in 2 arc second intervals. The
quintant has four partially rounded shades for the index mirror and
three round shades for the horizon mirror. The telescope’s distance from
the frame may be adjusted by turning a knob at the back of the rising
piece.