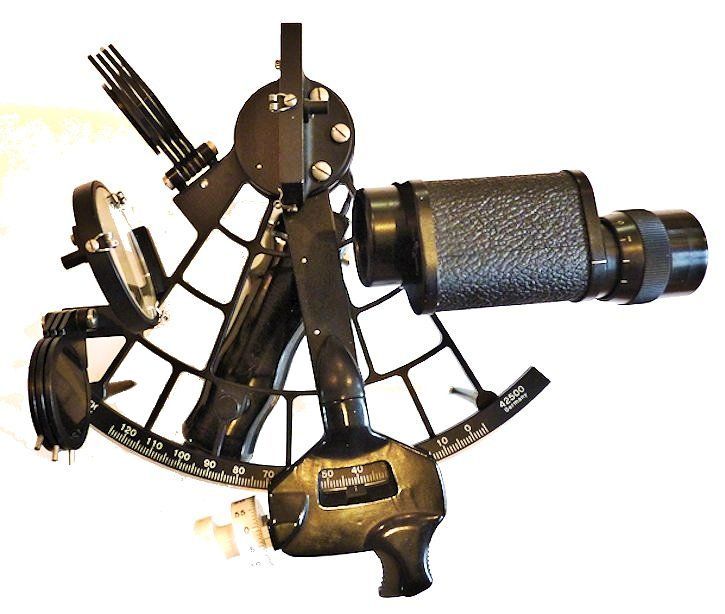 Presented is an absolutely outstanding and near flawless example of an earlier C. Plath sextant lightweight, aluminum sextant, Serial No. 42500. It comes with its deluxe, beautifully varnished, Mahogany case with a 2.5 x 28 Star scope, and a prismatic 6
x 30 Sun scope, and special astigmitizer lens. This lens takes the rays of a star and makes them into a straight line, increasing the accuracy of the sight. The original certificate issued by the Deutsche Seewarte, dated July 10, 1961 is included. Their official
stamp is that of a spread winged eagle above a cartouche with wreath that surrounds the German logo of that period.

The Deutsche Seewarte (German Naval Observatory), Hamburg was founded in 1878. It was responsible for making marine observations and geomagnetic observations. No data records were kept between 1919 and 1930, and the magnetic measurements were temporarily stopped in 1936. After the Second World War, the operations were merged into German Hydrographic Institute, which was renamed the Federal Maritime and Hydrographic Agency in 1990.

This instrument’s frame is precision made using the “lost wax” casting method and is of much higher quality than
other post War instruments. It is painted in a special flat black paint in contrast to the gloss black used on other Plath instruments. The sextant  operates like a well oiled piece of machinery, and has few signs of use other than might be expected for an instrument that is over 50 years old. It can be considered as “Near New”. See the CONDITION statement
for the details. For these reasons, it is ideally suited for someone who seeks only the highest quality sextant either as a collector of rare instruments or for use at sea. It will give outstanding dependable service, and pride in the ownership of a C. Plath sextant,p which is considered by many to be the standard by which other sextants are measured.

The index mirror has a minor imperfectio. Same for the horizon mirror. Special astigmitizer lens plus filters. Working lighting system

CONDITION: Irrespective of age, overall condition is excellent except that the 6 x 30 scope has some minor interior staining of the objective lens. This does not show when viewed from the ocular lens or affect its use. The small Star scope is perfect, but the rubber eye cup has hardened slightly. Adjustable index error is 2 minutes “off the arc”. All moving parts turn freely. Both mirrors are perpendicular to frame. The index mirror is forming a small light grey spot at the right spring clip and split image horizon mirror has some minor aging along the vertical edge. Neither of these will impede the accuracy of taking a sight. This style premium grade Mahogany case is in superb condition and looks like a fine piece of furniture, but expect to find some superficial scratches.. It is fitted with elegant polished nickel hardware and has the early style wood hold down clamp, space for the brush, mirror adjustment wrench and three accessories such as the telescopes. The frames paint is in new condition without chips, bubbles, or lifting, and the machined screws are bright and shinny. The illumination works using either electrical receptacle. The premium case is shown below with the sextant and its accessories.

This sextant easily rates FIVE STARS. It is one of the finest examples of a previously owned C. Plath Light Weight Classic that we have ever seen in the past ten years and is suitable for a collector, a prestige gift, or for use at sea.

This sextant is deserving of someone who can appreciate the fine points of a sextant, and wants this level of quality and excellence. It also makes a perfect gift.

QUALIFICATIONS: We are one of the few company’s still selling navigation instruments that know anything about them. For purposes of judging whether Joel’s opinion counts, he was the editor of the chapter on sextants of the 1977 Edition of “Bowditch”, The American Practical Navigator, NAVPUB 9; a member of the U.S. Naval Academy Navigation Symposium, 1975 -1978; the
author of a book on marine sextants, Cornell Maritime Press,1975, and the founding president of Nautech Maritime Corporation which partnered with Tamaya of Japan in the introduction of the MS 733 Spica, the MS 833, Jupiter, MS 933 Venus sextants and the famous NC-2 navigation computer, in the U.S. market. Joel is also a retired Master Upon Oceans, and held a U.S. Navy “D” Qualification as a Senior Skipper – Oceans. From 1995 through 2000, he served as a Varsity Offshore Sailing Team coach at the U.S. Naval Academy.

COMPANY HISTORY: In brief, Carl Plath started manufacturing sextants, in addition to other nautical products, in Hamburg Germany in 1862 though the company’s origin dates back to 1837. As a result WW II, C.Plath was dismantled completely by the occupation forces. Around 1950, various prohibitions were lifted, and C. Plath was allowed to begin production again of sextants and other nautical instruments. Also in 1949,C.Plath was offered a gyrocompass patent and in 1951 the first gyrocompass designed to this patent was presented to the public. C.Plath progressed from the role of instrument maker to that of a modern marine navigation equipment manufacturer. In the following years the product range was expanded by many more modern designs such as autopilots, speed logs, radio direction finders, etc.

In 1962 C.Plath was acquired by Litton Industries, a large American concern.The C.Plath North American Division was set up in 1978 in College Park near Washington. 1996 saw the introduction of the world’s first fiber-optic solid-state gyrocompass by C.Plath. The first ever gyrocompass with no moving parts. Sperry Marine was formed in 1997 with the combination of C.Plath, Decca Marine and Sperry Marine with more organizational changes yet to come. After 163 years, C.Plath changes its name to Sperry Marine in May 2000. In 2001 Sperry Marine becomes part of the Northrop Grumman Corporation, and shortly thereafter
discontinues sextant production. All parts, machinery, and tooling were destroyed.