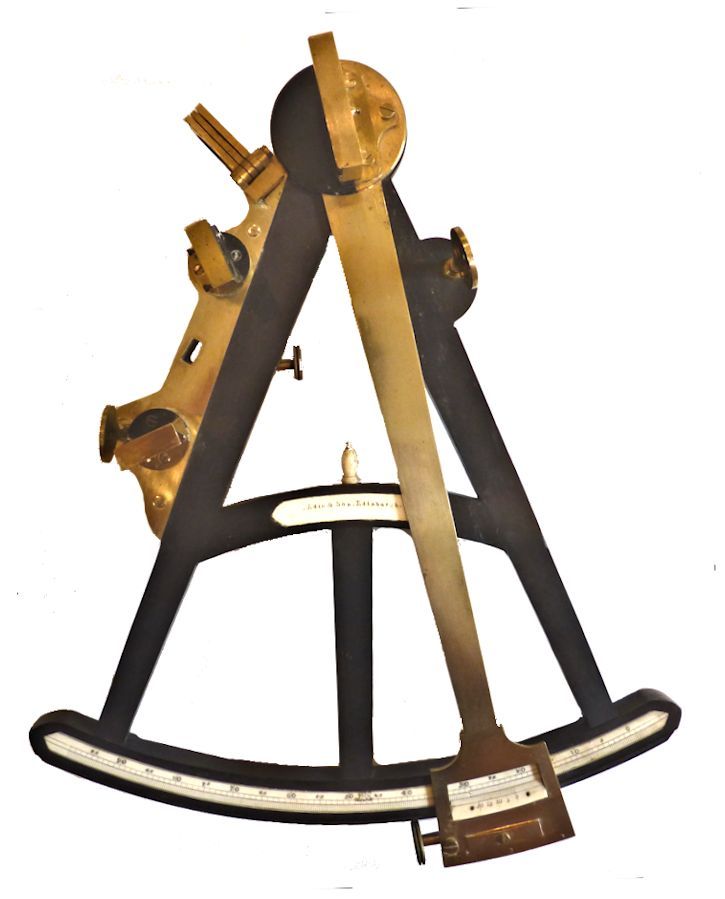 Presented is an elegant back sightoctant which could have been made as early as the first quarter of the
19th Century. It carries the name of  Adie & Son, Edinburgh on theivory cross bar of the frame. This company is known to have made
various types of instruments such as stick barometers, surveying compasses, theodolites, telescopes, and mining compasses, but never a
marine octant. ADIE’S BRIEF HISTORY:They were active during the period, 1835-1857, as an optician, meteorological &
mathematical instrument maker, located in Edinburgh, Scotland. The firmwas founded by Alexander James Adie (1775-1858),
an optician and instrument maker, in partnership between Alexander Adie(w.1823-1834) & his son. Adie & Son were appointed by King
William IV, and manufactured domestic cistern barometers and marine barometers.

DESCRIPTION:
This mariner’s octant was made during the last half of the 18th Century and is likely the work of Spencer.Browning & Rust
under private label for Adie.  It has two horizon mirrors and two peep sights. The lower assemblage is for taking “back sights“ and
the upper is for traditional observations. The mark, SBR, Spencer, Browning & Rust, appears on the arc between 45°; and
50°. SBR is known to be one of England’s foremost instrument makers. The sharpness of the arc’s numerals shows
that this instrument was made to the highest level of then existing technology by a company that stood at the top of its trade. Some time
ago, it was polished and lacquered making it suitable for presentation as an important gift. 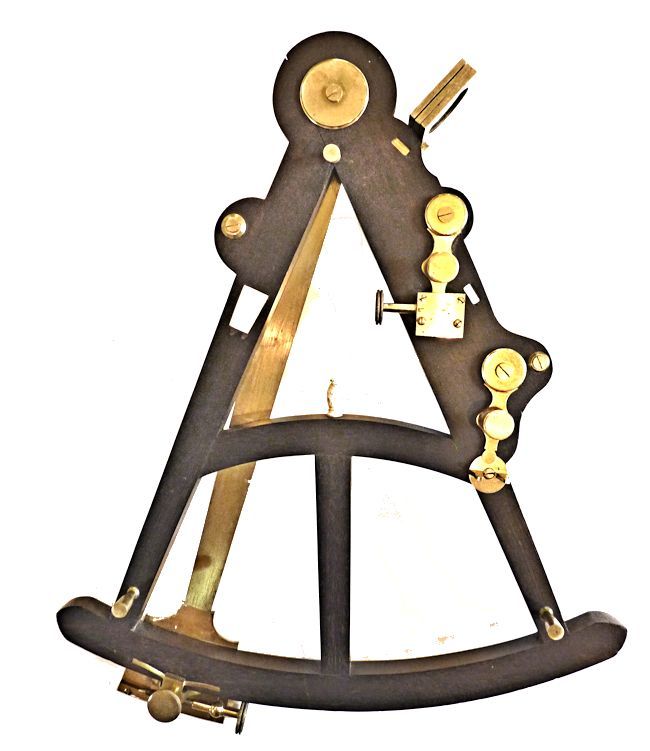 The back shows
the complex machined parts of the
instrument

Adie &Son is listed
in Webster’s Database of Instrument makers for various instruments, but no sextants or octants.
The instrument is 14 inches on the vertical which is oversize for octants, but smaller than the typical Hadley style
octant of 17“.  Hadley that invented the “double reflecting” principal introducing it to the Royal Society in London in 1731.

Adie & Son, Edinburgh in the crossbar 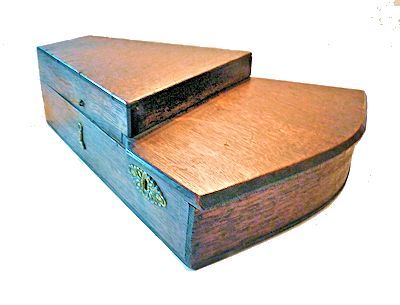 DATING THE
INSTRUMENT: The ivory arc measures from – 5 to plus 95 degrees on a Ebony frame which is in excellent condition. It is known
that Mahogany went out of use in favor of Ebony some time after 1750. The octant has a  flat brass index arm without a stiffening
brace that measures 14 inches from its top to the bottom of the index arm. Tangent screws
began replacing finger clamps in the last quarter of the 18th Century.There are two horizon mirrors, each
mounted on an adjustable turntable where the base can be rotated by loosening a screw which locks the mirror’s position.
There is a single set of three shades which may be moved from the upper to lower position. The ivory vernier scale reads from
right to left from 20 to 0 arc minutes. There are two peep sights. The adjustable tangent screw followed the use
of the index arm clamp which ended around the last quarter if the 1700’s.
All of these features date the instrument after 1750 and before 1800.  See Peter Ifland’s
comprehensive sextant work, “Taking the Stars”. particularly figure 64, page 57.

CONDITION:The instrument is in outstanding condition, except that there is a hairline age crack across the 30 degree mark. The graduated arc and all its hardware are original and exceptional. All three bronze legs are present. It has the original ivory pencil on the
cross bar which are  usually missing from most instruments of this age. All three mirrors have
most of their silvering, and are in excellent condition for their age. The machinery is all present and the shades are
intact The Case is the early style “stair step“, keystone design of this period. Both the top and bottom are free of cracks. Two corks hold the instrument secure. There are no labels. It is strong and sturdy, and the octant fits as it should.  There is a lock, but no no key. The hook is present but its arm is broken. 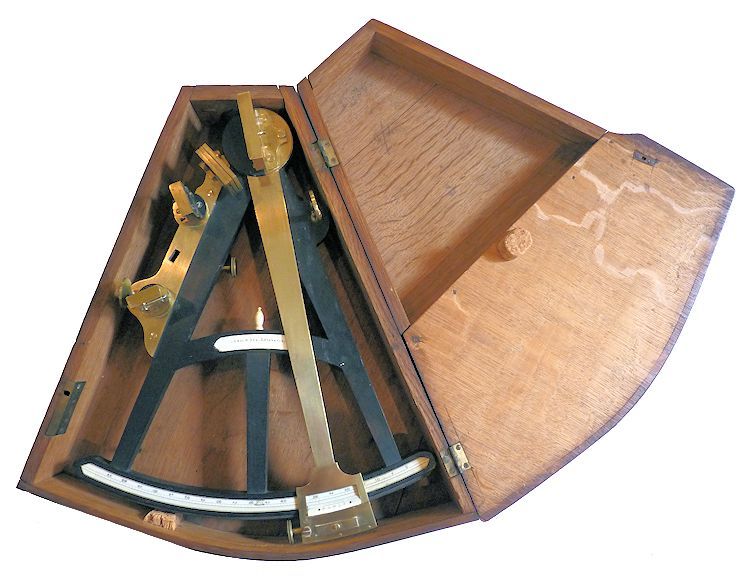 Instrument
in case. A few pencil notations on the right side

All in all, a rare, desirable, and special example of an early Hadley style octant 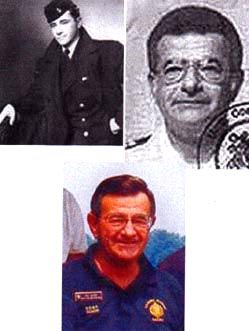 OUR QUALIFICATIONS: We
are one of the few company’s still selling
navigation instruments that know anything about them.
For purposes of judging whether Joel’s opinion
counts, he was the editor of the chapter on
sextants of the 1977 Edition of “Bowditch”, The
American Practical Navigator, NAVPUB 9; a member of
the U.S. Naval Academy Navigation Symposium Board,
1975 -1978; the author of a book on marine sextants,
Cornell Maritime Press,1975, and the founding
president of Nautech Maritime Corporation which
partnered with Tamaya of Japan in the introduction of
the MS 733 Spica, the MS 833, Jupiter, MS 933 Venus
sextants and the famous NC-2 navigation computer, in
the U.S. market. Joel is also a retired Master
Upon Oceans, and held a U.S. Navy “D” Qualification as
a Senior Skipper – Oceans. From 1995 through 2000, he
served as a Varsity Offshore Sailing Team coach at the
U.S. Naval Academy.