Presented is a very rare example of an officer’s

pierced guard having a spread crested eagle in the center. Mowbray
attributes this and others in this style to the
little known cutler, Solomon Jackson of
Birmingham, England. It follows their practice of using silver wash
or silver
gilding over brass on this style sword,
all of which he dates to Ca
1810.

The plating on this sword is so
heavily applied that it looks like a true Silver hilt.
But careful inspection under a powerful magnifier shows a slight loss
of silver in a few places with brass underneath. The
loss of silver where only the slightest trace of brass is showing is on the hilt at the high point of
the cross guard where it
sat at the wearer’s hip, at the flat sided ferrule above the guard, and on
the obverse on the face of the quillion. Similar traces of silver loss are found on the
reverse of the mounts. Overall, there is about 99% of the silver
plating remaining so that under normal circumstances and light, this sword
will appear to be a true Silver hilt.=”left”>
THE PIERCED GUARD:
The pierced eagle in the guard
has a banner consisting of five round beads above it, and four other on
one side and five on the other. This treatment is discussed in detail in The “American
Eagle-Pommel Sword” by E. Andrew Mowbray, who refers to the beads as
representing stars and concluded that they have no significance in
dating the swords. We are not so sure of that.  We agree
that after some point adding stars becomes physically impossible and maybe the correct cutoff
point is 15. 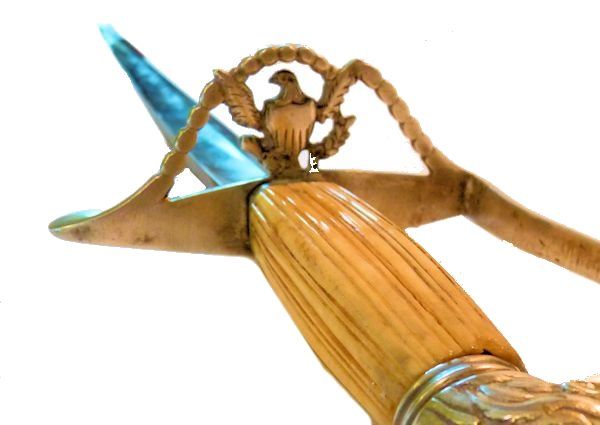 That said, setting Mowbray’s conclusion aside, Vermont was the 14th
State admitted into the Union on March 15, 1791. There are also six
stars on the blade in one group and 8 stars in
the other totaling 14 which makes us believe this
sword is celebrating that event, and was made shortly after 1791.

Solomon Jackson is known to
have made a number of different variations of this design with a
pierced crested spread eagle appearing as langet and on the cross
guard. This sword exactly follows the examples
in his book which
include two examples that were 28 inches in length and were classified
as artillery or naval swords. The added length of
this sword suggests it was for a cavalry or mounted artillery officer.

The pommel is fitted with an eagle head that
was originally incised in sharp detail with the tang coming through a
round rim at the top of the head. There is a little looseness of the
hilt at the pommel and guard ends and at the simple unadorned
ferrule The bone reeded grip swells in the center and the
reeds conform to the curve.The sword has a sturdy stirrup
guard and its original scabbard, but the scabbard is broken in half at
the mid point.  The scabbard, except for the break which
may be glued
together for display, is in good condition. The mounts are
embellished on the obverse with a simple design, and plain on the
reverse. They have their original carrying rings. The blade
has a single fuller for its
entire length and tapers from 3/4 inch at the hilt. It has not been
sharpened, and has about 97 percent of its blue niter and gold gilt
remaining which has faded. Except for some light rust at the riccasso
and widely scattered small spots of light rust elsewhere, and a few
nicks towards the point, it is in in very good
condition. Unfortunately, there
is no known provenance which can trace
the history of this sword. This type sword is thoroughly
discussed in Sections 13, 14, and 15, pages 108
through 112 of  The “American Eagle-Pommel Sword” by E.
Andrew Mowbray

THE SCABBARD: The black leather scabbard
is cleanly broken in the center and could be glued back
together. The silver plated mounts have some dents and discoloration. The
metalwork has been reattached and pinned at some later time and
there is old hand stitching for four inches above the drag. There is an
approximately 3/8 inch piece of leather missing from the very end. The
scabbard is otherwise complete with its silver mountings, excluding
the tip, all of which are engraved on the obverse side only. The
leather body shows cracking and crazing overall, but
the stitching is all present and tight.