All
original near flawless condition 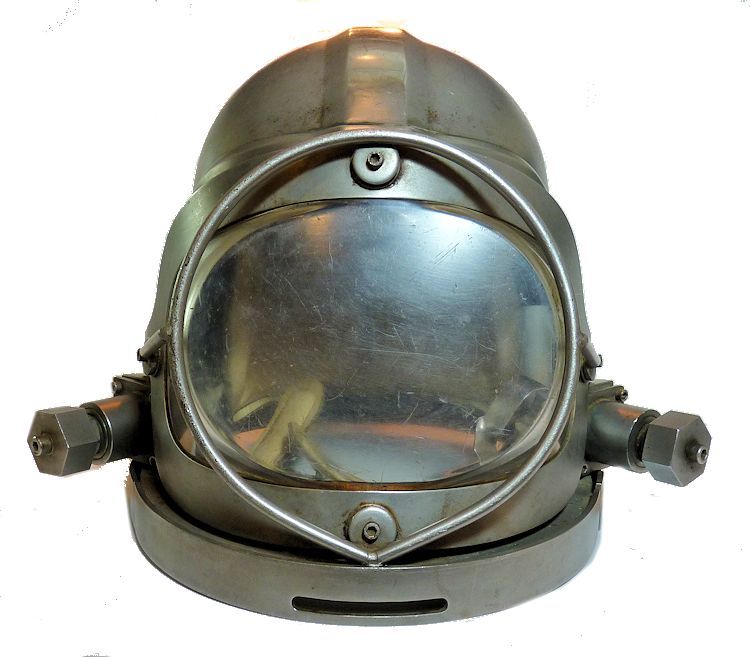 Presented is one of the desirable light weight
stainless
dive helmets designed and made by Joe Savoie of Boutte, Louisiana in
the 1970’s. Joe revolutionized dive helmet designs with his carefully
engineered stainless components and rubber neck dam. He passed away at age 70 on march 10
1996. This helmet was originally owned by M.
G. who purchased it directly from Joe in 1977 and used it for
the next 15 years until he moved to a Kirby Morgan . It
has been in his closet for the last 25 years until just
recently.The
helmet is in remarkably good condition with everything intact and has
some special accoutrement’s consisting of a new face plate and headliner
set. 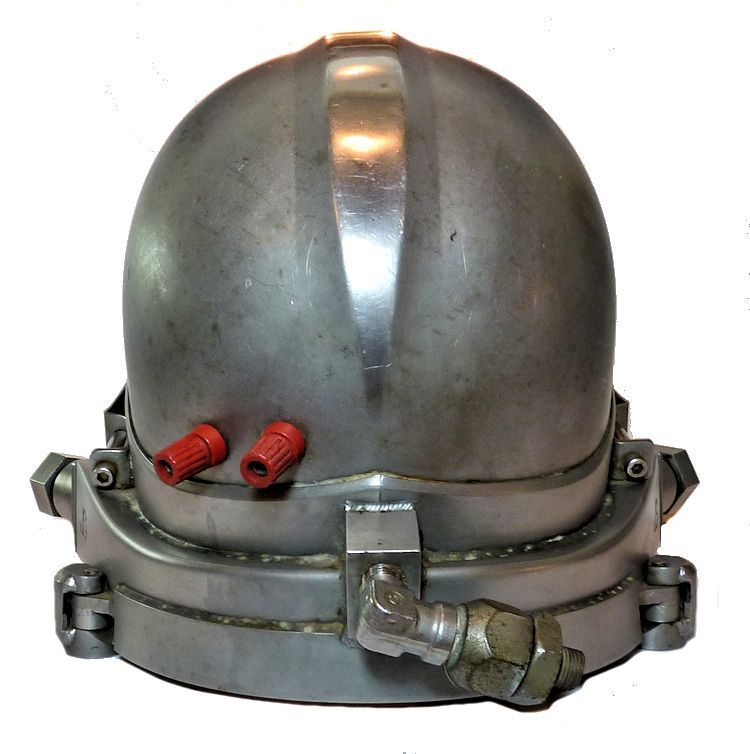 Joe’s original Style 1 design was
based on an Italian race car driver’s helmet with fiberglass body and
flip-up face mask with his machined stainless fittings, and innovative
rubber neck dam. It became immediately popular in the Commercial Diving
Industry. This Style 2 helmet has a fixed face shield, and improved air
control and exhaust valves.The first of the Style 2 helmets continued to
use the fiber racing shell which was changed to steel in 1971. In total
Joe produced several hundred different types and styles in both
fiberglass and stainless steel for air and mixed gas and a few with
a number of demand regulators.

PROVENANCE: The helmet was
originally owned by M G, a west
coast diver, who traveled world wide. He purchased it directly from Joe in
1974 and dove it for 15 years before moving to a Kirby Morgan. He was meticulous
about his gear and had a ne replacement face plate and new headliner set for it. It has been in
his closet for the last 25 years. 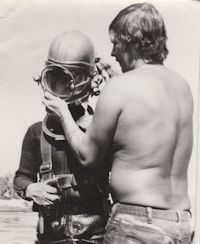 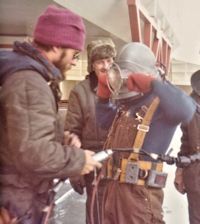 HIS SIMPLIFIED
BIOGRAPHY: The son of an
avid Scuba Diver who served in the Navy in WW II, the owner of this
helmet learned how to dive from his father at the early age of ten. They
would take charter boats out of Los Angeles and dive old street cars
that were dumped offshore to make reefs. It was at this early age that
the son knew he wanted to become a professional diver. He even made
money selling diving for golf balls he recovered from the water traps
back to the golfers. After graduating high school he went to the
Commercial Diving Center of Wilmington, California and graduated with
Class D-52 in September, 1971. Shortly thereafter, he left for the
Gulf of Mexico and worked there before he headed to Florida. There he
found a job working for a small salvage company which had the contract
to salvage the Oriental Warrior, a ship which had had sunk off
Jacksonville. During this time he met some of the managers at Murphy
Pacific Marine Salvage. When his job on the Oriental Warrior ended, he
moved back to California and then went with the Murphy Pacific crew to
clear the Suez Canal. From there he was busy diving on to various Murphy
Pacific salvage jobs in South America, the Caribbean, Central America,
and Alaska. 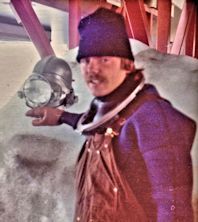 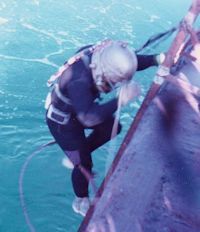 In 1977, M went to work for Crowley Maritime Corporation
where he continued doing salvage work, marine construction, and
pipeline. In 1981, he took a job with Associated Pacific Constructors in
Morro Bay, CA. He continued work in diving, salvage, and offshore
pipeline work. In the 1990s he became a barge captain for Associated
Pacific Constructors and continued to supervise diving and salvage
operations. M retired from Associated Pacific in 2006 and still
lives in Morro Bay close to his children and
grandchildren.

The pictures in Alaska were taken
in 1975 and those with the blue water were taken at the Sueze Canal
in 1977. 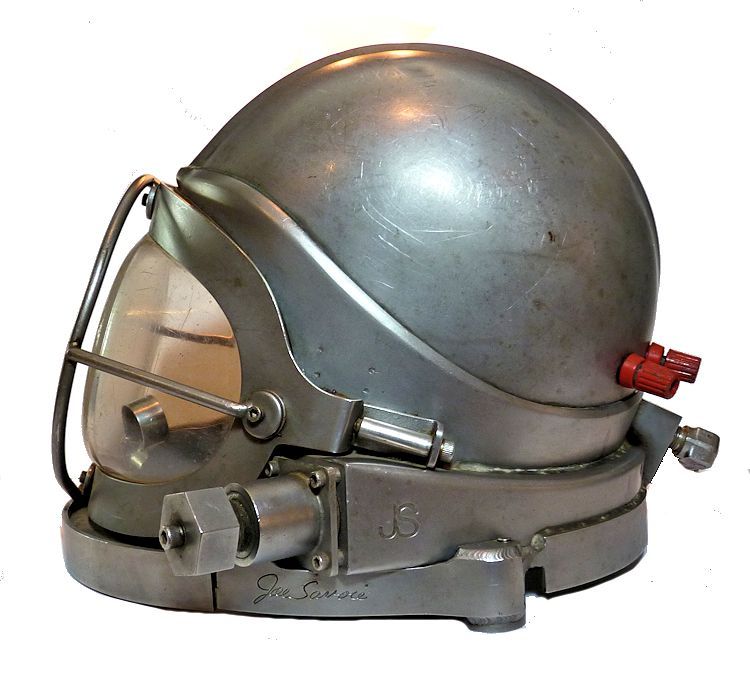 MARKINGS: The initials, JS appears
on both exhaust valves with Joe’s signature beneath. The double digit
serial number is stamped on the intake elbow.

CONDITION: There
is one small dent on
the left. front top. The fitted lens has yellowed slightly with age.
There is a small spot at the front center with crazing. The interior
liner shows the normal marks of use with nothing significant to comment
on. There is a metal bracket in the front which might show in the
pictures which held a microphone which has been removed. The air dam
rubber where it was turned under has cracked on the surface,
but looks to be usable. The owner at one time polished the
ridge that runs down the center of the helmet. The air dam
collar was removed for taking the pictures because of a
lead weight on the bottom. The replacement lens has a few minor
scratches.

COMPARABLE EBAY SALE : On August
11, 2011 a stainless air/gas Savoie helmet sold on eBay for$8550.00. The listing stated it had been modified
by a commercial diver and that the original liner and faceplate
were replacements.