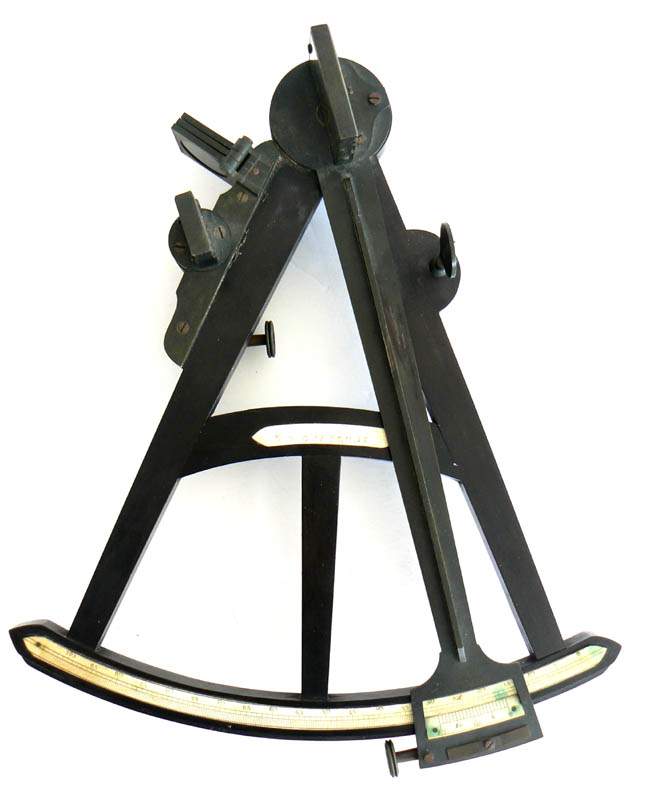 PRESENTED is a mid 19th Century “E. & G.W.
BLUNT” antique sextant with ebony frame, ivory graduated arc and vernier, and bronze machinery that is in remarkable
“Like New” condition. We have never seen an instrument of this age so carefully preserved that it may have come from a time
capsule. Unfortunately, this is a rare case where the photographs do not do justice to the subject. The instument has a magnificient
luster which is just not captured by a camera no matter what the pixels.

The arc measures from – 5 to plus 105
degrees. This, all original, and magnificently made instrument has a brass index arm with rib measuring 11
3/4 inches long, and has a frame width of 10 3/4 inches at the arc. It is fitted with an early style ivory
vernier scale, reading from right to left from 0 to 20 arc minutes, a peep sight, three sun shades. and an index
and horizon mirror. All the hardware still retains 100 percent of its factory applied midnight, ink black, coating. The arc
and vernier are masterfully engraved with all the markings clear and sharp. The central piece of ivory fitted on the cross
bar is imprinted, “E & G W BLUNT”.

HISTORY: Edmund March Blunt opened a chart and instrument store in New York in 1811.
His sons, Edmund and George William Blunt, trading as E. & G. W. Blunt, opened a similar store in 1824.
“Edmund Blunt was born in Newburyport, Massachusetts in 1799 and died in Brooklyn, New York in 1866.
When his father retired in 1822, the store was first taken over by his son-in-law, William Hooker, then by Blunt’s sons, Edmund
and George William and the firm became E. & G. W. Blunt.  George William Blunt was born in Newburyport in 1802 and
died in Brooklyn, in 1878.” Reference:  Smart, Charles E.   The Makers
Of Surveying Instruments In America Since 1700  Troy, New York:  Regal Art Press.   1962
In the early days, most of these instruments were imported. An advertisement from 1837 states: “One
of the firm is now in England superintending the manufacture of Theodolites, Transit Instruments, etc.,–and any orders
for Instruments not now on hand, will be forwarded to him, and executed promptly.” The Blunt firm was also
noted for publishing a Nautical Almanac starting in 1850. In the mid-1850s, after having built a dividing engine, the
Blunts advertised that they could “divide Astronomical and Nautical Instruments to a degree of precision which they
will guarantee to be equal to the best of foreign make.” The firm, with its dividing engine, became Blunt & Nichols
(in 1866), Blunt & Co. (in 1868), Eckel & Imhoff (in 1872), and H. A. Kolesch (in 1885).
This sextant predates the company name change in 1866, and helps date it.  On August 4, 1871,
equally renown, John Bliss & Sons,  purchased the famous Blunt & Co. The combination lasted for 100
years more.

PROVENANCE: Recent
ownership was by a Virginia Family in which it was handed down for generations.
We also have this very unusual and important boxed compass
from the same maker. See https://landandseacollection.com/id618.html

CONDITION SEXTANT: The instrument, its ivory name, graduated arc,and its hardware are exceptional
condition, with only a few tiny spots of green verdigris of age. All three original bronze legs are present. All the machinery
is present and in working order except that the mirrors, as expected, are degraded by age. This instrument looks as if
it was made yesterday with every part and finish in unbelievably fine, original condition belying its 155 years of age.

THE CASE: The original, darkly finished, stepped, keystone
case took all the handling and shipboard abuse. It has age cracks top and bottom. One hinge broke a long time ago and was
repaired by using sail twine and later a piece of wire. Two professionally made brass backing plates are used to strengthen
the age cracks. The key to the lock is missing.

OTHER MARKINGS: The initials,
“W.P.C.” are painted in black on the cover. There  is a very old label from “John Crichton, manufacturer of Mathematical
Optical & Philosophical Instruments, 112 Lindenhall Street, London” on six lines. 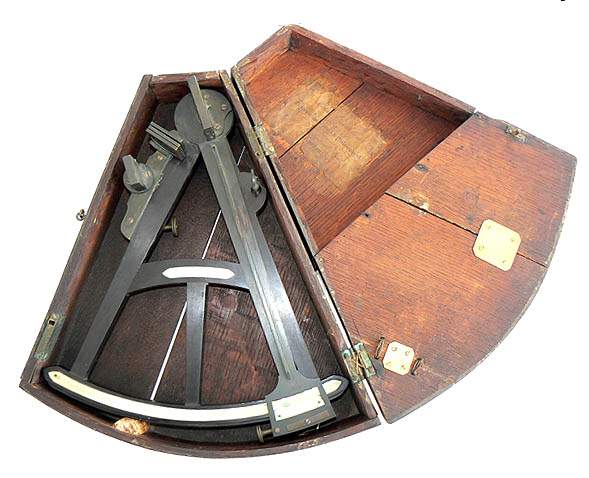 All in all, a outstanding and important example
from a premier 19th Century American instrument maker.

SCROLL DOWN TO GALLERY FOR ADDITIONAL PICTURES

QUALIFICATIONS: We are one of the few company’s still selling navigation
instruments that know anything about them. For purposes of judging whether Joel’s opinion counts, he was the editor
of the chapter on sextants of the 1977 Edition of “Bowditch”, The American Practical Navigator, NAVPUB 9; a member of the
U.S. Naval Academy Navigation Symposium Board, 1975 -1978; the author of a book on marine sextants, Cornell Maritime Press,1975,
and the founding president of Nautech Maritime Corporation which partnered with Tamaya of Japan in the introduction of the
MS 733 Spica, the MS 833, Jupiter, MS 933 Venus sextants and the famous NC-2 navigation computer, in the U.S. market. Joel
is a retired Master Mariner, and held a U.S. Navy “D” Qualification as a Senior Skipper – Oceans. For
six years he was a Varsity Offshore Coach at the U.S. Naval Academy.