This Fine Item Has Been Sold! Thank you!
MORSE NAVY STANDARD DIVE
PUMP NO. 1 A 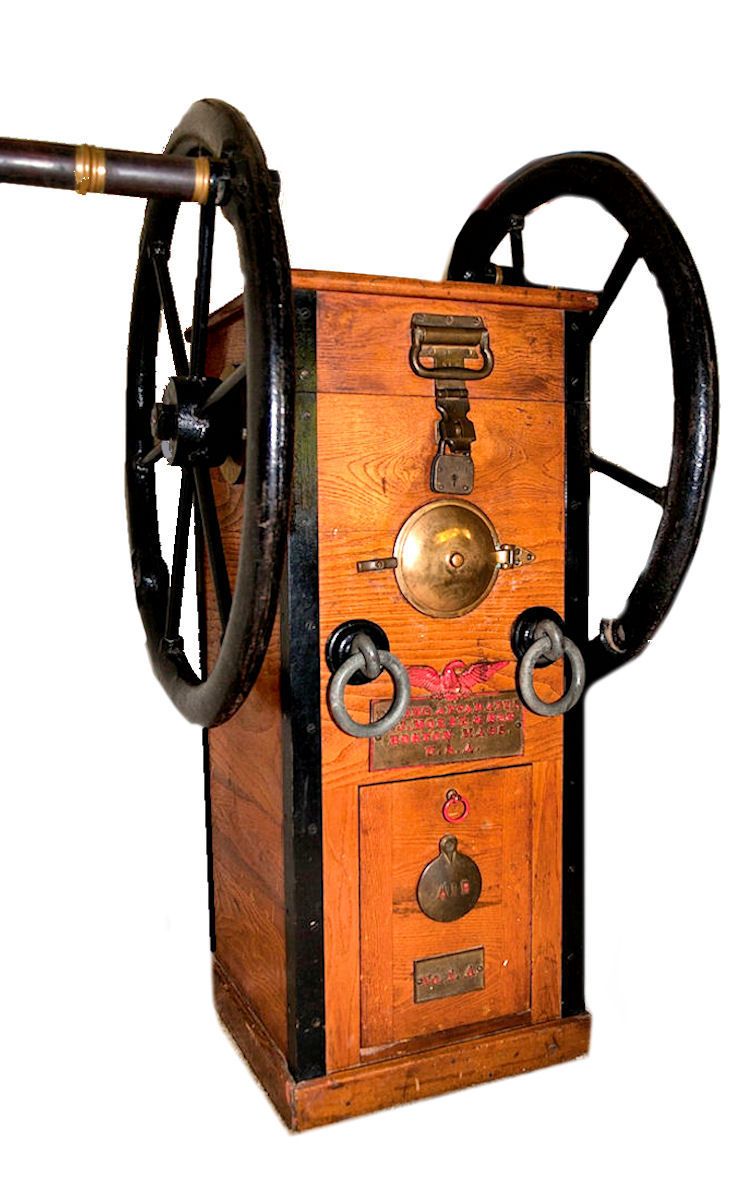 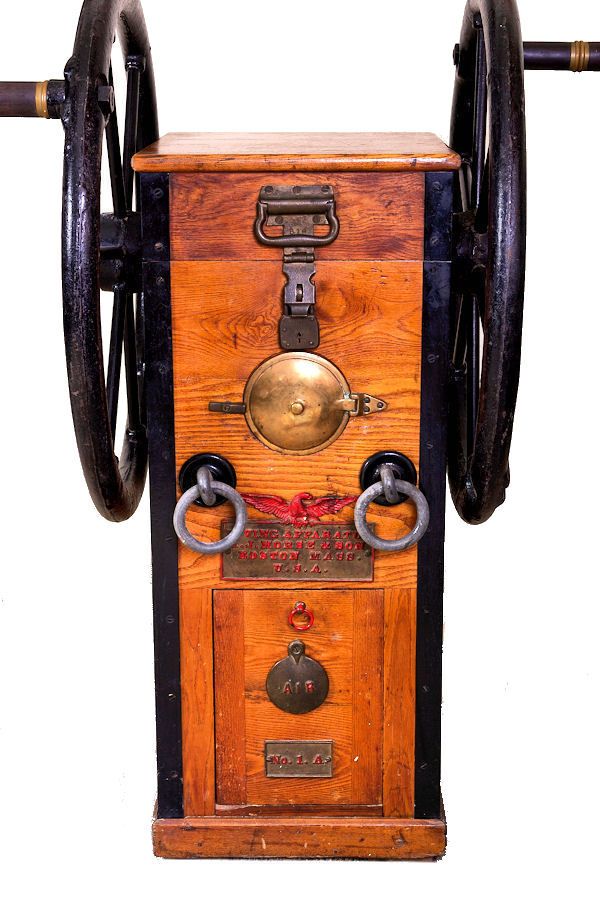 Presented is an A.J. Morse & Son Navy Standard Air
Pump No. 1 A that was adopted by the Navy for use on smaller ships, as well as by the commercial diving industry.
This style pump appears in the Andrew J. Morse & Son Diving Apparatus Catalog dated May 1, 1904. This one has an extra
drive wheel.  It was designed for one diver operating up to a depth of 100 feet. This example most likely dates to
around 1917 since it was discovered with a Morse Navy MK V from 1916, the helmet’s first year of production. The helmet
is for sale as well. See https://landandseacollection.com/id898.html
FEATURES: The Morse A 1 pump is housed in a hardwood chest with iron tie down rings, and
a large iron flywheel as standard. This example is fitted with two flywheels, and iron angles at all four corners. It
features a single double acting cylinder with valves that could be serviced without removing the pump from its chest. There
is a water jacket around the cylinder to cool the air that was pumped to the diver. A special reservoir on the lower beam
acts as an air chamber collecting surplus oil and cause the air to flow steadily and remain free of contaminants.
A large gauge on the front indicates air pressure and the depth of water where the diver is working.
PROVENANCE:   This Morse air pump and a 1916 Morse Navy MK V dive helmet were purchased
together in the Sacramento, CA area around 1991 by an individual with eclectic interest’s as his first and only dive
gear purchase.They came from
the Estate of an eclectic collector whose interests ranged from such things as multiple Wells Fargo stage coaches, pre-industrial
age tools, Civil War memorabilia, various marine relics, and old barber chairs to name only a few. The widow started
selling the items that could bring in quick cash, and advertised them locally. She said that the pump and the MK V helmet
came from the Naval Postgraduate School in Monterey, CA and were bought around the mid-1950’s. The immediate former owner,
also an eclectic collector, in addition to the air pump, helmet, bought numerous tools and some guns.

CONDITION: A limited attempt has been made to determine if this
air pump works properly. A visual inspection indicates that it is very clean inside, with no rust or residue, and
that there does not seem to be any missing parts. However, without a professional tare down, no assurance can be given
that something isn’t broken or missing. That said, the drive wheel turns the crankshaft which makes the piston go up
and down generating air pressure at the gage. Therefore, the pump appears to be in excellent condition for its age, and
has had its paint refreshed sometime in its past.

BECAUSE
OF ITS AGE, THIS PUMP IS BEING SOLD FOR DISPLAY ONLY!


BECAUSE OF ITS AGE, THIS PUMP IS BEING SOLD FOR DISPLAY ONLY!