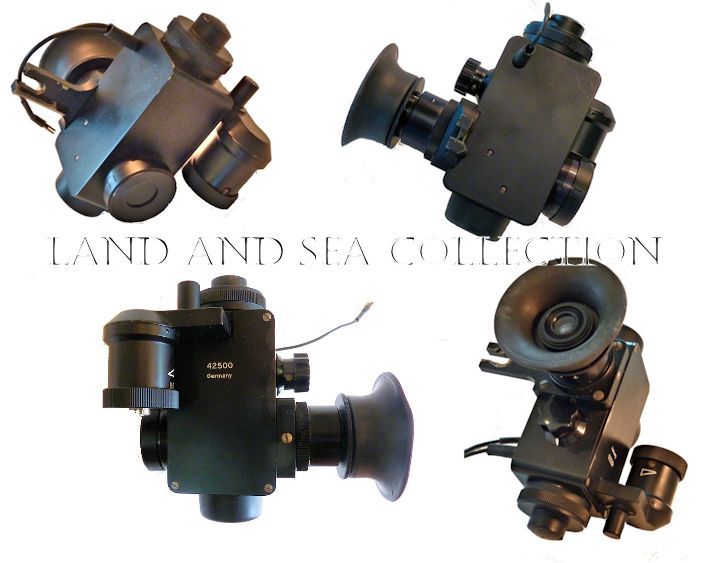 Is one of the very rare C. Plath Bubble Horizons that has a fully adjustable bubble, and a rheostat for adjusting the brightness of the internal lighting system. It actually may be the rarest of them all because it was made to accompany a Plath Classic sextant carrying the same 42500 serial number.  The sextant is being sold separately. See https://landandseacollection.com/id975.html

The design dates back to WW II, when these devices were successfully used on all types of surface ships and submarines. Plath was not allowed to get back into the sextant business directly after the end of World War II, but had to wait until about 1954 before the War restrictions were lifted. This version, whose correct trade name is “DRAGONFLY”,  was reintroduced to the Commercial Marine Market in 1957. During the period 1950-1960, the German Navy requested this design be used in the “Libellenhorizont” and from 1970 through 1980, similar devices were issued to U.S. Submarines to allow for backup celestial navigation under all conditions. They also were much in demand by the world’s merchant mariners.Because of the expensive design, not many of the Dragonfly bubbles were made after WW II, before they were discontinued and
replaced by a simplified version that used a non-adjustable bubble, and next the adjustable lighting was discontinued. Most users of the newer devices preferred the fully adjustable versions and felt the new one was a step back-wards. Many were said to have written Plath to voice their objections. Over the years, the new version Plath bubbles have been well accepted by seagoing users up until Plath curtailed sextant production in the late 1990’s. The demand for them continues even as they become more difficult to find.

SUGGESTED USES: The bubble horizon has a 3 power optical system and a smaller than normal field of view. The internal dampening mechanism of the bubble is greater than will be found on less costly alternatives, but getting use to it requires some practice. The Plath fully adjustable Bubble Horizon is far superior to all other artificial horizons, and those devices that can only be used for objects with altitudes of less than 60 degrees, and cannot be used for twilight sights. This makes it ideally suited for land based training applications, for land navigation and for use at sea from ships that provide a stable platform.

Interestingly, in the 1970-80’s, this device, in the form being sold here, was issued to U.S. submarines for back-up celestial navigation. Ref. Dutton’s Seamanship & Navigation, 12th Edition, Article 2206, page 385.

PROVENANCE: This bubble was owned most recently by an overseas collector of nautical instruments for the past four years. He purchased it from the estate of a collector of general nautical antiques who had owned it for quite some time. Its history prior to that is unknown.

CONDITION:  Used but in excellent working condition. There was some minor paint loss on the front cover plate’s rear edge and some minor loss on the bulb cover and elsewhere which have been touched-up. The paint used on the sextant and on this bubble is a flat black and not the glossy black that was customarily used. The slip-on green filter for the objective lens is present.

DIRECTIONS & INSTRUCTION SHEETS: A Plath sheet of instructions in German and English comes with the device. There also will be a diagram of the internals and a diagram of the geometry of the optical system. The device is simple to use and provides an artificial horizon using a circular illuminated bubble as a substitute for a horizon reference. The bubble is centered at the midpoint of the viewing area and the celestial body is brought into coincidence with the bubble’s center. Intensity of the internal light is adjusted by a small knob on the front. Bubble size is adjusted by the larger rotary dial on the base of the cylinder on the left. A large bubble is preferred for sun and moon sights, and a smaller bubble for stars and planets. The ocular lens is adjustable. Land And Sea Collection’s Supplemental Instructions are also included.

OUR QUALIFICATIONS:We are one of the few company’s still selling navigation instruments   that know anything about them. For purposes of judging whether Joel’s opinion counts, he was the editor of the chapter on sextants of the 1977 Edition of “Bowditch”, The American Practical Navigator, NAVPUB 9; a member of the U.S. Naval Academy Navigation Symposium, 1975 -1978; the author of a book on marine sextants, Cornell Maritime Press,1975, and the founding president of Nautech Maritime Corporation which partnered with Tamaya of Japan in the introduction of the MS 733 Spica, the MS 833, Jupiter, MS 933 Venus sextants and the famous NC-2 navigation computer, in the U.S. market. Joel is a retired Master Upon Oceans, and held a U.S. Navy “D” Qualification as a Senior Skipper – Oceans. For six years he was a Varsity Offshore Sailing Team Coach at the U.S. Naval Academy. Some of his memberships have
included the: Association of Naval Aviation, Silver Wings, The Tailhook Association, Naval Academy Sailing Squadron, McCampbell’s Aces Squadron, Naval Historical Foundation, and the Naval Order of the United States.

In the photograph below, it is shown alongside the last bubble horizon design made by C. Plath which has an internal power
supply.Like all Plath bubbles, except for the one being offered, the size of the bubble is not adjustable. On July 3, 2008, Ken Gebhart of Celestaire wrote us that the last version was discontinued around 2001, and
sold new for $1,700.00.

MARKINGS: The serial number 42500 appears on the front cover plate above Germany. 42500 is the serial number of the Plath Classic sextant that this device accompanied and which is for sale separately. Missing is the factory name that appears on others we have sold that were made 15+ years later, and the Plath Sun shooter logo. It is also curious why the instrument is marked Germany, rather than West Germany.

USABLE WITH: As pictured above, it fits the C. Plath Navistar Classic sextant. With an external battery supply, it will work with Ca 1990 C. Plath sextants, Cassens & Plath, Tamaya, Freiberger, and the Russian
CHOT/SNOT.

It is suited for someone who can appreciate obtaining a rare device with a sophisticated design, and is willing to pay an appropriate price for this level of C. Plath quality and excellence.

PLATH COMPANY HISTORY: In brief, Carl Plath started manufacturing sextants, in addition to other nautical products, in Hamburg Germany in 1862 though the purchase of the David Filby instrument company though the company’s origin dates
back to 1837. As a result WW II, C.Plath was dismantled completely by the occupation forces. Around 1950, various prohibitions were lifted, and C. Plath was allowed to begin production again of sextants and other nautical instruments. Also in 1949,C.Plath was offered a gyrocompass patent and in 1951 the first gyrocompass designed to this patent was presented to the public. C.Plath progressed from the role of instrument maker to that of a modern marine navigation equipment manufacturer. In the following years the product range was expanded by many more modern designs such as autopilots, speed logs, radio direction finders, etc.

In 1962 C.Plath was acquired by Litton Industries, a large American concern.The C.Plath North American Division was set up in 1978 in College Park near Washington. 1996 saw the introduction of the world’s first
fiber-optic solid-state gyrocompass by C.Plath. The first ever gyrocompass with no moving parts. Sperry Marine was formed in 1997 with the combination of C.Plath, Decca Marine and Sperry Marine with more organizational changes yet to come. After 163 years, C.Plath changes its name to Sperry Marine in May 2000. In 2001 Sperry Marine becomes part of the Northrop Grumman Corporation. In the 1990’s Plath came out with a series of new sextant designs with overlapping designs and confusing names. Shortly thereafter, C. Plath quit producing sextants in 2002. The parent company has completely liquidated everything including machinery, equipment and spare parts.