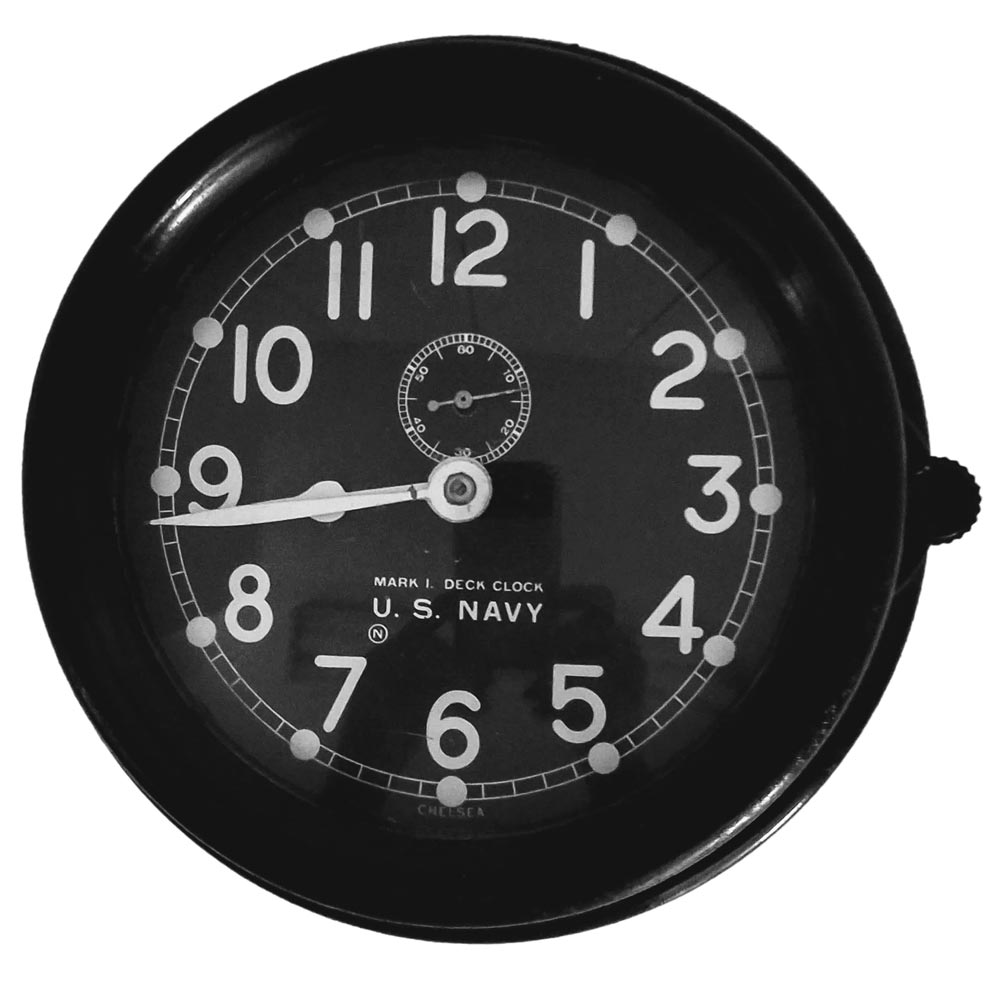 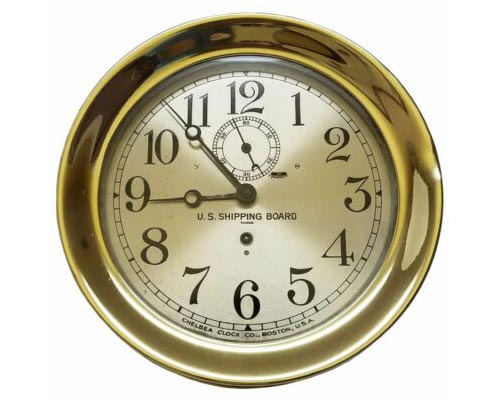 CHELSEA  10″ PILOT HOUSE CLOCK 10″ CHELSEA “U.S. SHIPPING BOARD” CLOCK PILOT HOUSE MODEL Presented is a rare and important, antique, eight-day clock with an 8-inch face, manufactured for the U.S. Shipping Board between 1915-1918. The Chelsea Pilot House movement is marked with serial number 129322, which is dating it to that period.   CHELSEA CLOCK […] 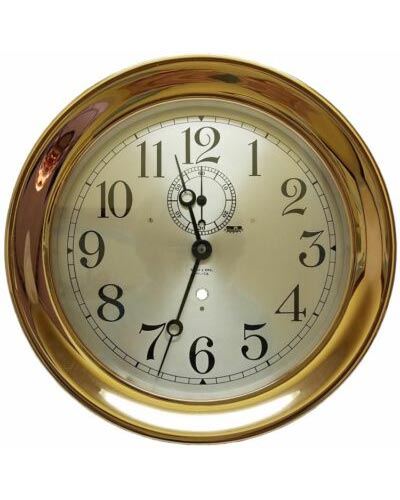 10″ CHELSEA PILOT HOUSE CLOCK Ca 1915-1918 ORIGINALLY SOLD BY RIGGS & BROTHER OF PHILADELPHIA PURVEYOR OF FINE NAUTICAL INSTRUMENTS AND EQUIPMENT TO THE SHIPPING INDUSTRY AND GENERAL PUBLIC Presented is a rare and important, antique, an eight-day clock with an 8-inch face, manufactured for RIGGS & BROTHER, Philadelphia between 1915 and 1919. On the […] 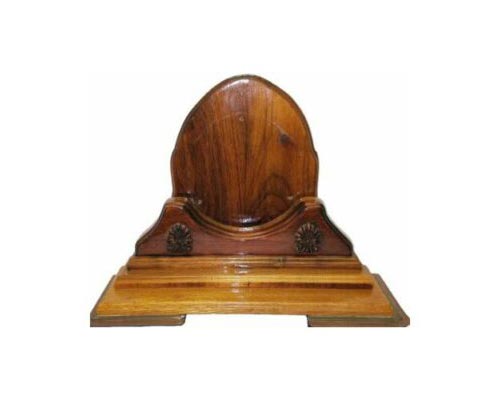 Custom Made Large Wood Clock StandWe acquired this beautiful hand-carved wood clock stand some time ago. We find it is an excellent fit for our 10′ wall-mounted Chelsea Maritime Command Center or Pilot House clocks. This allows these stunning clocks to be placed on mantels, shelves, or desks, rather than wall-mounted. DIMENSIONS: Length: 19 1/2″ […] 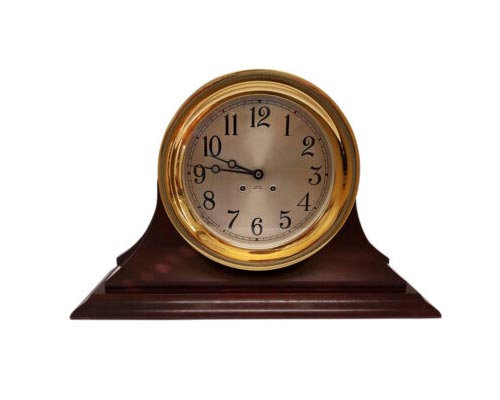 CHELSEA PRESENTATION SHIP’S BELL CLOCK ON MAHOGANY STAND Presented is a beautiful contemporary Chelsea Ship’s Bell Clock in a finely finished mahogany stand.  This is a very large Clock with an 8” Face and 10 ½” width.  The depth of the clock is 4”, The weight is 23 ½ Lbs.  The clock stand measures 20” […] 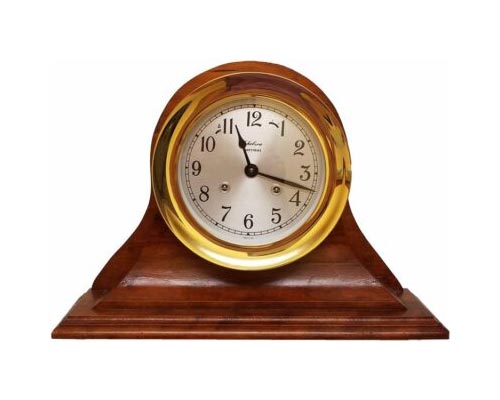 CHELSEA SHIPSTRIKE CLOCK on Mahogany Stand   The clock is housed on a very fine hardwood stand. Presented is a full 7-inch size ship strike bell clock which, in a lacquered brass case, strikes the hour and half hour. Immaculate, like new condition. This is an outstanding example of a very fine striking bell clock. […] 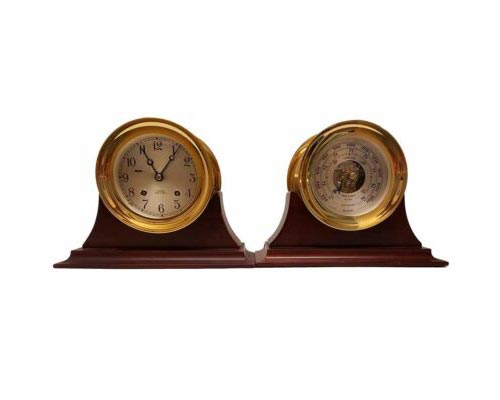 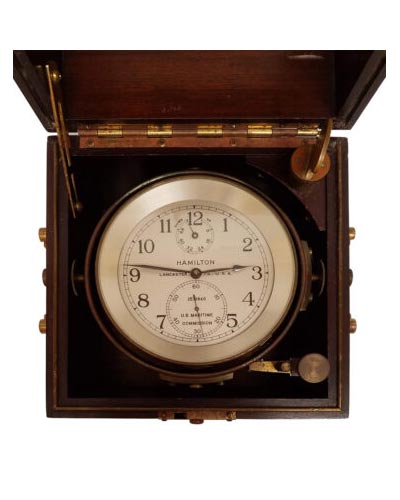 World Famous Hamilton 21 Marine Chronometer designated for the U.S. Maritime Commission     This fine example is a worthy addition to any timepiece collection. Presented is a WW II HAMILTON Model 21 Chronometer in its traditional three section varnished mahogany wood case with full gimbal mounts. It is in fine condition with some minor scratches. Most […] 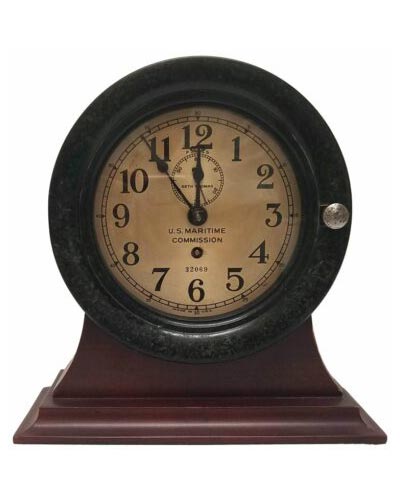 SETH THOMAS WW II U.S. MARITIME COMMISSION CLOCK The stand, a $75.00 value, is included! Presented is a vintage, eight-day, Seth Thomas U.S. Maritime Commission clock with a 6″ silver face with black etched numerals and an independent second hand. It has the number 32069 on its face. It has a 115 A, 7 Jewel […] 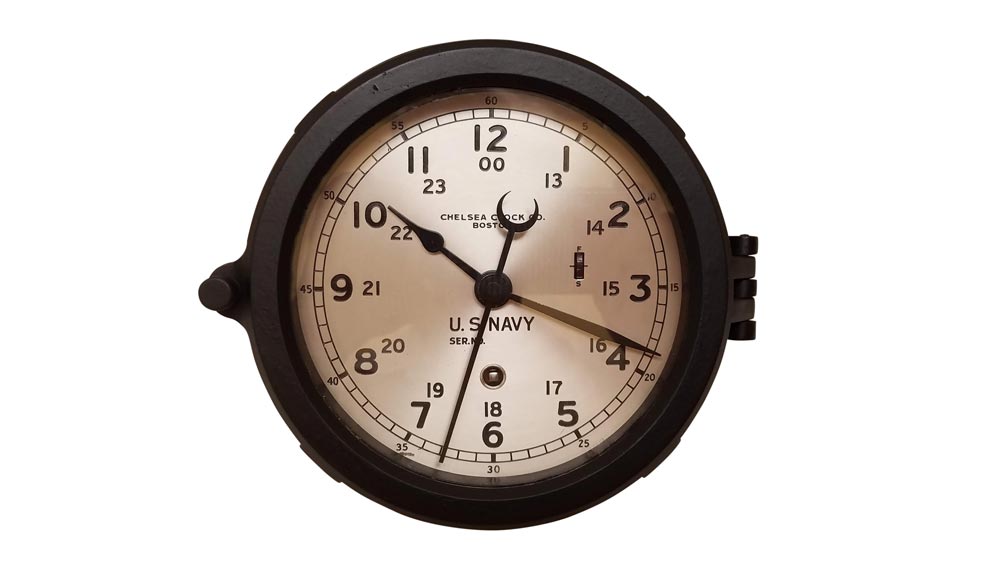